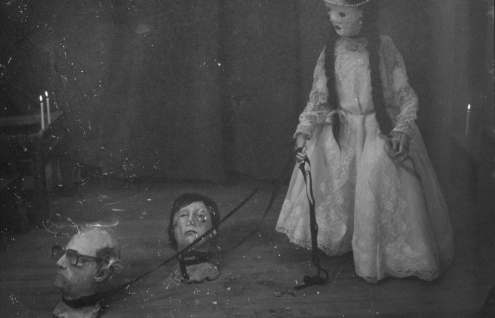 Upstream Gallery is proud to present Burials, the fourth solo exhibition of Cristóbal León and Joaquín Cociña with the gallery. In Burials, León & Cociña explore new interpretations of religious symbolism and rituals rooted in traditional Latin American culture. Burials showcases a short film and five paintings by the artist duo.

Having premiered at the Venice Film Festival in 2021 - where it won the Best Short Film Award - Los Huesos (The Bones) now has, as part of Burials, its Dutch première. Los Huesos revolves around the present drafting of Chile's new Constitution, which is to replace the current document which dates to 1980 - Augusto Pinochet’s dictatorial era. The Constitution is being written by a citizen convention which has been elected by popular vote. Within this context, Los Huesos is the world's alleged first stop-motion animated film that dates back to 1901 and was excavated in 2021. The 16mm footage documents a young girl performing rituals with human bones to summon the spirits of the conservative politician Diego Portales (1793-1937) and Pinochet’s close collaborator Jaime Guzmán (1946-1991), both shapers of two Chilean Constitutions. The two conservative oligarchs legislators are summoned to unwrite the history they helped shape. The black and white celluloid film is accompanied by Tim Fain’s sound design. León & Cociña produce their films by combining different techniques such as photography, drawing, sculpture, painting and performance. By adopting this unique style of unearthly bricolage, the artist duo quite literally try to ‘undo’ their country’s legacy of hardship through meticulous work on each individual filmic frame.

To quote Ari Aster, the executive producer of Los Huesos (who has a.o. produced horrors Midsommar and Hereditary): "[...] Cociña and León struck me as the clear successors to Jan Svankmajer and the Quays. Here they seem to be channeling Ladislas Starevich and Joel-Peter Witkin, while sharpening their uncanny and unmistakable signature. Los Huesos is a brilliant film by two utterly singular filmmakers."

The idea behind Los Angeles is that it is a film produced in Chile in the 40s or 50s. The film revolves around a mixture of Indiana Jones-type adventures, and is an attempt to create a national mythology around the Nazi-esoteric ravings of Miguel Serrano (Chilean writer, diplomat and pro-Nazi). There are visions of a dark future linked to capitalism and its perversions, eccentric mixtures of mummies from northern Chile located in the southern zone, real and symbolic caves that connect the continent with Antarctica, and Nazis who are attempting to create a new human type through experiments with genetic mutation and cloning.

The paintings displayed represent different versions of movie posters for Los Angeles - a movie which is yet to be made. Changing the regular production order of cinema and visual arts, doing what is normally done at the end (the poster) before finishing the script. As León & Cociña put it: "We want to transform this stage, which is normally final and quite cosmetic, into an autonomous artistic project, giving artistic weight to the idea of the posters - or the promotional public image - by giving it a material, aesthetic and exhibition scope. In this way, a part that is relatively bureaucratic becomes part of the creative process of a larger project, since the production of the paintings [the posters] sheds light on the direction that the story and the final aesthetics of the project we are developing can take."

Taking movie posters as a reference to make paintings also allows the artist duo to introduce narrative and eccentric elements in the pictorial field, introducing specific references for the whole project. The references present here are, first, American horror and monster movie posters from the 1930s and 1960s. Second, Ghanaian movie posters made by amateur painters to promote American paintings. And third, the local production of paintings to promote movies in theaters. At the local level, the closest reference are the figurative paintings of Juan Dávila. This sum of references and the realization of a project limited to the pictorial, are an unprecedented path of investigation for León & Cociña as an artistic duo.

Cristóbal León and Joaquín Cociña (both 1980, Chile) have been working together since 2007. They were educated at the Universidad Católica, Santiago de Chile. León also studied at UDK (Berlin) and De Ateliers (Amsterdam). An unpolished cinematographic language characterizes the stop-motion films of León and Cociña. The papier mâché figures and innocent-looking drawings strongly contrast with the heavy topics such as religion, sex and death the films deal with. Since their last exhibition at Upstream 5 years ago, the career of the Chilean filmmakers and artists has taken off. Their first feature film La Casa Lobo (The Wolf House) premiered in 2018, traveled to many film festivals around the world and won several awards and prizes. In 2020, the film was released for streaming in the US and got covered by various press, among which The New York Times and The Washington Post. In 2021, Leon and Cocina presented their new short film Los Huesos (The Bones) at Venice Film Festival, where it was awarded the Best Short Film. 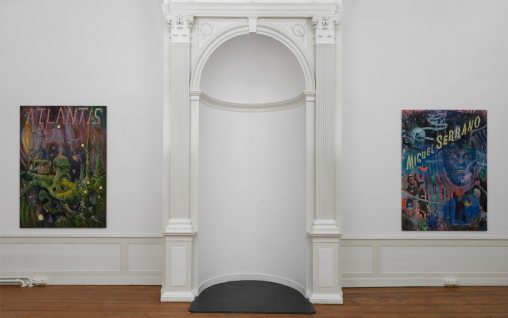 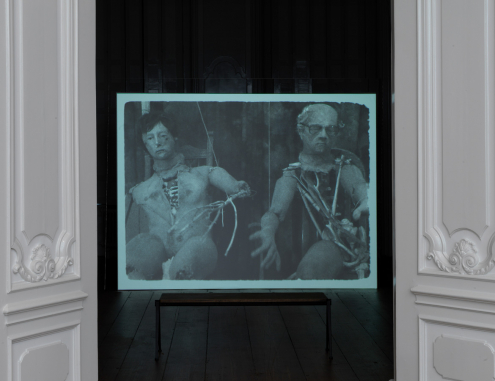