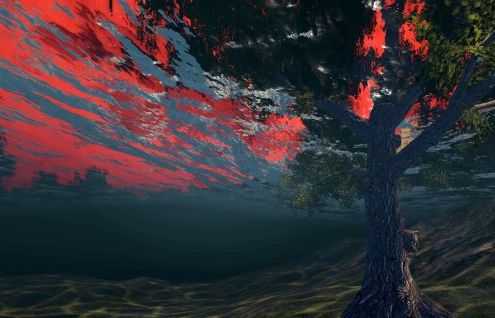 "The internet is an unimaginably vast ecology of data and processes. Deeply stored data is immutable like buried granite, while other data is constantly in flux like a rushing mountain stream. The whole system is in continuous evolution through endless processes reshaping the data interacting with each other and with ourselves. Here, at the opaque surface of this churning ocean of bits, is where the exchange between the realm of the computer and that of ourselves takes place. A space that is in a permanent state of performance, the interface."(1)

Jan Robert Leegte is among the first artists who were involved in the 90s internet art movement. â€‹In 2002, he shifted his main focus to implementing digital materials in the context of the physical gallery space. He aims to bridge the online art world with the gallery art world by making prints, sculpture, installations, drawings and projections, connecting to historical movements like land art, minimalism, performance art and conceptualism. As an artist Leegte explores the position of the new materials put forward by the (networked) computer.

Inside | Outsideâ€‹ is about the opposition of the inside of the computer with the outside - the reality of the user. In 1969, the term "transparency" was introduced as a way of programming for computers. The method aimed for software code in which the details were concealed and only the main lines were visible. This concept became the example for interface design as promoted by Apple's founder Steve Jobs: an interface so intuitive that anyone can communicate with it - but at the cost of all internal operations of the machine being completely hidden. The introduction of transparency as a new standard for computer interfaces marked a definitive "wall" between the inside and outside of the functioning of computers. â€‹Inside | Outside also refers to input / output or I/O, a computing term that describes the communication between the computer and the user, also the moment of contact between body and machine. Thirdly it refers to 1 and 0, or to the binary on and off which forms the building block of the computer and of our complete information landscape.â€‹ â€‹Finally, Inside | Outside points to the everold conflict between culture and nature. Culture being what mankind has created, and the reality we live in, as opposed to nature, that which is outside. The rift between these two has grown, says Leegte, and is causing the collapse of ecological systems in accelerating force now that climate change is a fact. Dealing with his personal feeling of dread, Leegte revisited existentialist authors and writers of weird literature, including H. P. Lovecraft to interpret them in the light of our contemporary situation.

The show can be seen as a circular narrative starting at â€‹Drawing of a Button.â€‹ This drawing depicts an interface element reminding of the interface style of the late nineties, the period when Leegte first started working as an artist on the internet. The medium and subject make the drawing feel historical and nostalgic. The technique used is that of chiaroscuro, a technique of working with highlights and shadows on coloured paper, popularised in the Renaissance period in Italy. This technique was again used in early interface design to suggest haptic materiality. Drawing can be seen as a performative act, a direct expression of body to paper, as is the pushing or clicking of a button. This drawing is an attempt of Leegte to capture, or reenact the moment of interaction with the computer, a medium that is essentially performative as well. The drawing expresses the unbridgeable inside and outside of the machine. It depicts the interface that is the opaque membrane between both worlds

Across from the drawing is the largest of the series â€‹In the Blink of an Eye,â€‹ consisting of 4 panelsâ€‹.â€‹ This work is again a flat capture of a performative moment, only this time happening on the other side of the interface. During the brief moment a human blinks their eyes, about a tenth of a second, an average smartphone has been instructed to perform the very simple act of counting. The resulting file produced by the phone has been printed on 4 large panels in a font size barely readable. Within the overwhelming display of numbers, patterns appear to grow like the intricate stone layers in mountains, forming landscapes emerging from the simple brute force of the processor. The density of the different numbers is the cause for the emerging patterns. An 8 for example is darker than a 1. This effect has been deepened by adding a colour gradient to the density scale. The colour palettes have been harvested from photographs of different landscapes. The series â€‹In the Blink of an Eyeâ€‹ covers a personal history of computers that marked important moments for Leegte’s artistic life, the first being the Commodore 64.

The work is a prelude to the video installation installed in the front room, â€‹Performing a Landscapeâ€‹. For this work a real-time landscape simulator used in game development has been utilised to create a fragmented view of a storm-ridden and flood-battered landscape. Within games, generative landscapes are used instead of designed worlds, to create both the scale and the detail, but also the uniqueness of each game to be played. Minecraft had for instance a gameworld that was the size of the earth when the game was introduced - they have since made it infinite. With its unfathomable depth, this pure power within computersimulations has introduced a new habitat for the sublime. (2) A computergenerated
landscape is infinite and extremely detailed, but is created and can be destroyed at the click of a button. This extreme fragility echoes our relation with nature in the current discussions about climate change and ecological breakdown.

In the room we are overwhelmed by the force of this simulated landscape. The storm can be heard sweeping through the trees as well as the roar of the ocean. Various screens and projections offer fragmented views of a natural scene. The setting also contains eroded Lovecraftian man-made structures,â€‹ â€‹subject to large insetting waves. And as you notice these non-natural forms in the landscape, the show circles back to the pastel drawing it started with. For in 1997, Leegte’s pivotal moment in becoming an internet artist, was when he uploaded his first html file to a web-server, transforming a sketch in code into a public browser-based installation. A simple gesture of clicking the button of standard FTP software. The act happened in a time of a naive but hopeful online ideology, at the evening party of the end of a history. It is the interface of this humble uploading software which can be seen in the landscape, succumbed by simulated flooding and erosion. An interface that stood between the inside of an attic room and an ever expanding global network outside.

To compensate for the ecological footprint of the art works in the show, 5% of the sales will be donated to a tree planting programme.

1. Screenshot of Performing a Landscape (2020), part of a 9-channel video installation. 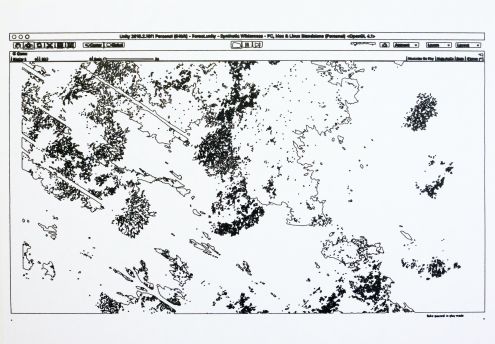