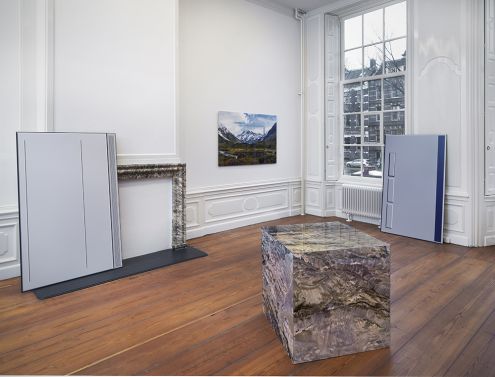 Upstream Gallery proudly presents Sculpting the Internet, the first solo exhibition by Jan Robert Leegte (NL, 1973) with the gallery. Being among the first artists who were involved in the 90s net art movement, Leegte challenged the new materiality that was provided by the Internet from the perspective of a sculptor. Working with materials that have been in constant transformation due to the shifting technological and cultural ecosystem that is the net, his works too flowed in and out of forms of manifestation, and in and out of the net. During Sculpting the Internet, Leegte presents both new and existing works made with the materials he has loved and worked with all those years.

The title of the exhibition is derived from Leegte’s view on materiality. Looking back on his early days working with the Internet, he recalls: ‘When I started experimenting with the Internet as an artist, the world was a completely different place. It was before the 9/11 attacks, in a time where culture was naïvely rebellious and not yet under threat of the global fire that would arise. It was before the dot com crash, in a time where the Internet was an undefined open place, governed by netiquette, anonymity and personal websites. It was in that time that I set out to explore the new materiality set forth by the networked computer as a beginning sculptor.’ Over the last 20 years, that same material has led a path of transformation, serving numerous purposes whilst existing both off- and online. As Leegte further explains: ‘The growing diversity but also ambiguity of materiality in my work has naturally progressed over time. It parallels the continuing fragmentation of reality, the unsettling but undeniable condition put forth by the accelerating technology, but most of all, a Grand Effect of the Internet. There seemed to be a truth that was embedded in materiality, but that truth has now become ambiguous and multifaceted. It has become a network of expressions together circling the notion of the material or even the truth of the material. Each one specifically unapproachable, but all in all, in the end, the sculpture is present.’

Mountains are grand natural statements of sculptural expression. They are birthplaces of monumentality and romanticism. Their crumbs are the raw materials that provided us with a long tradition of sculpture. Then there is the ambiguous materiality of the digital, the man-made bits and bytes, flowing through systems, from which designed materials have emerged. Among them is the ‘drop shadow’, a material bereft of all our notions of materiality, it being nothing but the absence of light cast upon a surface due to an obstructing object. Being objectless, asides it being a digital simulacrum, places it in opposition to the mountain. The images of the mountains used for this series of works are anonymous wallpapers, backgrounds for computer desktops, found on the web. It is in this desacralized digital condition that the drop shadow seems to overtake the mountain in sculptural authority.
The individual works exist as unique prints based on the size of the web image, face mounted on acrylic, mounted on dibond. The series is based on the Internet work Mountains and Drop Shadows (2013), available through www.mountainsanddropshadows.com.

The sheer amount of (semi-)professional photographers flooding the Internet with images of landscapes has defused the romantic ideal of going in the field and capturing the Great Outdoors. The once radical en plein air method of painting introduced by the impressionists became tamed over time. Now, with numerous amateur courses offered, this genre of paintings has become the most generally appreciated. Compressed Mountains attempts to reinvigorate the original intention, by swapping the actors. The field painter is now an algorithm visiting the databases of Flickr and venturing into the wild by randomly selecting images within queries. The algorithm then uses the same ubiquitous JPEG compression used by all web 2.0 services to manage the size of image files. Rather than optimising size, it compresses the file maximally, leaving the raw computational impression of a delocated landscape. The individual works exist in a browser-based and offline version and as prints. The series contains the works: Compressed Landscapes, Compressed Mountains, Compressed Forests, Compressed Sunsets and Compressed Moons.

The Window panels first originated within the installation Dumpster (2016). This work was a continuation of another, entitled In Memory of New Materials Gone (2014), that commemorated the fast-paced passing of digital materials due to the ever continuous updating of software and / or it going obsolete. The panels are abstract monuments dedicated to screen time of the past, but also digital ornamentation taking a sculptural position within our centrally heated buildings.

The mural presented in Sculpting the Internet is a version of the mural made for the installation Three Spaces (2006). Table Borders are optional ornamental frames introduced in the original HTML set in the early nineties. The table border continues to be a highly popular net aesthetic that pops in and out of vogue. At the same time, it betrays the initial creation of the web being a CERN invention designed with a scientific function in mind. The original HTML language, the root language of the web, was designed to be a markup language for scientific documents, tables and charts, forms, and so on. The table border is an accidental default aesthetic object. A non-functional ornamental material born at the particle accelerator, populating the expanding universe of the web.

Google Maps as a Sculpture

Google Maps has become a standard web feature, used daily by everyone. But Google also offers it as material to be used by anyone through an API (Application Programming Interface). By means of this programming door, anyone can implement the technology and interact with it for their own means, thus packaging it as a new composite digital material. Like a physical composite material, this also is a construct of elements; satellite images, geo-coordinates, an interactive layer like zoom and navigation, and more. It is software that functions as a complex base-material to be used for further production. The work Google Maps as a Sculpture (2017) uses this API to mine satellite images as raw material. The work is based on the Internet work Google Maps as a Sculpture (2013), available through www.googlemapsasasculpture.com.

This work originated in 2013 as a Photoshop study, entitled Study for Black Square Embedded in Social Media. For Sculpting the Internet, the work is executed as a grid of six screens connected live to the Internet showing six of Leegte’s social media profile pages. The content of the pages have been edited and uploaded in such a way that the screens together reveal a black square. With the webpages being live, users can interact with the work by adding comments, notifications, open chats, and pop in and out of available friend lists. The piece will be in the exhibition as a live performance, after which it will become a six channel video wall piece consisting of six screen capture video’s of the performance.

Title:
*The title of the show is borrowed from Filippo Lorenzin's article in Furtherfield. http://furtherfield.org/features/reviews/sculpting-internet-review-digital-materiality-exhibition-jan-robert-leegte 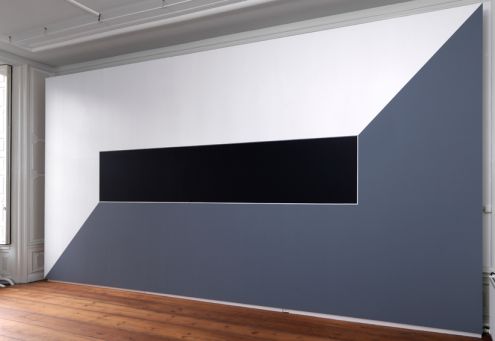 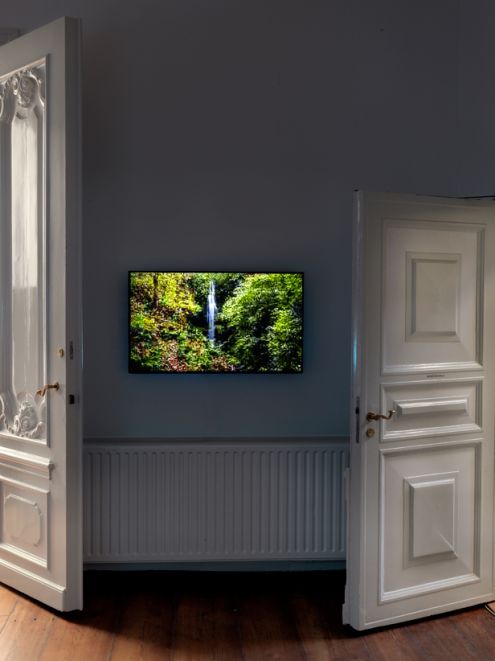