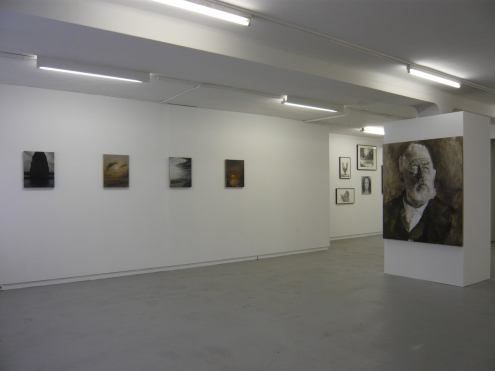 “Nemesis – Das Große Glück” is the second solo show of the Berlin based artist Dennis Rudolph at Upstream Gallery, Amsterdam.

Displaying oil paintings, etchings and drawings, delicately elaborated series as well as single sketchy pictures, the exhibition is highly heterogeneous – providing intimate insight into the process of artistic creation as such. As diverse manifestations as sublime landscapes, portraits and allegorical images emerge from Rudolph’s powerful will to artistic expression. Old Masters There is one painting dominating the installation by its mere scale: The iconic grisaille portrait „Meister der Insel I“ can be taken as the centre of the whole irritating constellation. It corresponds with two small-sized works on paper. The extinguished gaze of the phantomlike “Meister der Insel II” and the resemblance of “Meister der Insel III” to the conventional depiction of an Evangelist point to the character of ‘the blind seer’ – or rather ‘the inspired artist’. This self-referential gesture indicates Rudolph’s reflection about art and the role of the artist within society, which continuously finds expression in his imagery through significant art historical references. Landscapes Viewed in this light, “Europa nach dem Regen” can be related to the tradition of the symbolically charged Romantic landscape painting. The auratic sceneries of this painting series appear under glowing veils of mist: Be it deserted landscapes, expansive skies, mountaintops or rocky coasts, gigantic towers or fragile electricity pylons as relics of human civilization… Steeped in a solemn atmosphere, “Europa nach dem Regen” seems to be heavy with meaning. But whereas the religious symbolism of, for example, Caspar David Friedrich’s landscapes can be deciphered, Rudolph’s secular landscapes not only remain silent, but even empty out their allegorical meaning by their mere serial repetition. Martyrs Even though Rudolph draws deliberately on the legacy of European art, his historical appropriations involve always transformation and re-evaluation processes. „No title (Martyrs)“, a series of portraits, stands out against the elaborateness of Rudolph’s landscapes through its expressive, gestural style: The dissolving colours define only vague shapes but generate an enormous emotional vehemence. Regarding the expression of interiority, the portraits are reminiscent of the ecstatic faces of Gothic devotional pictures (which had the religious function to empathize with the cathartic Passion of saints). Again the appropriation and reanimation of a pictorial tradition goes hand in hand with its decontextualization and the radical opening of its signification. This artistic strategy not only indicates our distance from the history that produced these images, but – while entirely preserving the temporal tension – makes them available for a contemporary artistic approach. Graphic Works Using etchings, Rudolph relaunches the ancient artistic medium of Dürer and Rembrandt for his art practice. The concept of graphic works such as ”Nemesis”, “Verkündigung“ and “Kleiner Morgen” is allegorical. However, the classical allegorical vocabulary – dramatic skies, puttos and personifications – is updated by his insertion of a modern metropolis and skies ripped by aeroplanes. Rudolph appropriates the allegorical image as symbolic representation of universal conceptions of the world (be it mythological or religious), generating a double effect: On the one hand reintegrating allegory into contemporary art, and on the other hand bringing its inherent premodern meta-narratives back into play. It is probably this dual principle, which characterizes Rudolph’s entire artistic practice: Transforming historical modes of artistic expression for contemporary appropriations, while passing on the distant echoes of the enchanted worldviews of premodern ages. 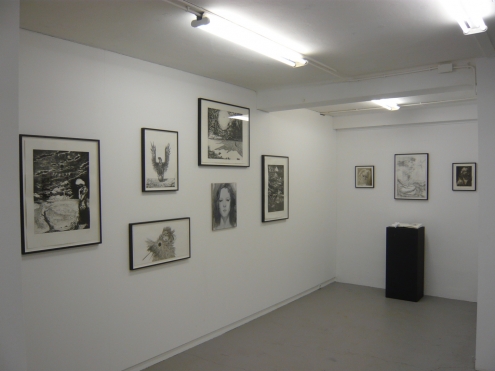 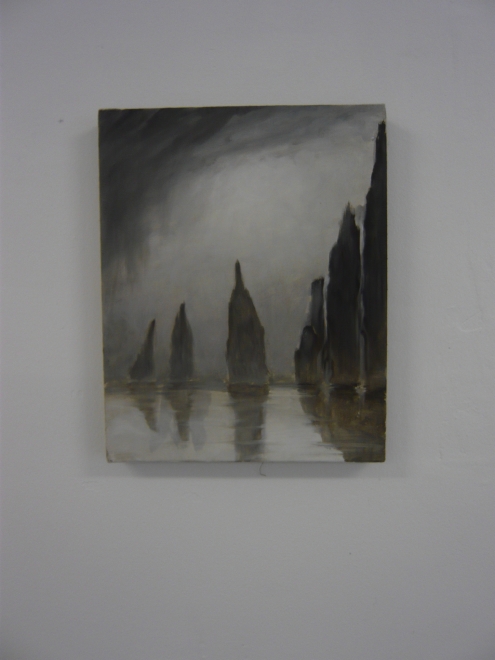