No Style, Reflections of public statements on art.. 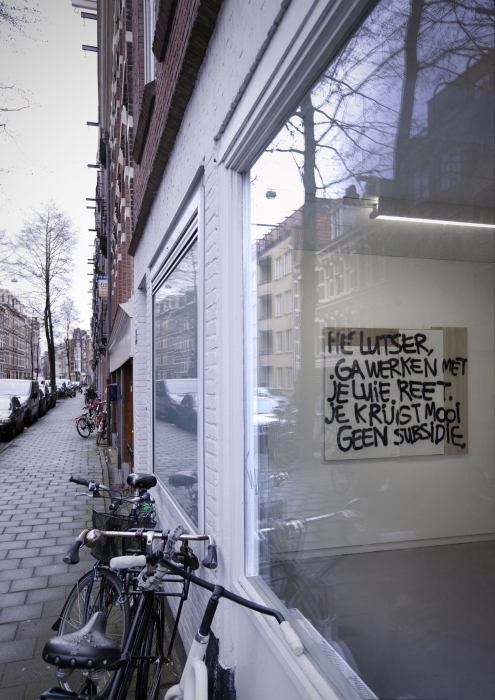 Jeroen Jongeleen’s work generally evolves in public space. He leaves traces in the urban landscape which he documents with photographs and films. He labors under the alias “influenza”, creating various icons, signs and texts as an anonymous signature. With his interventions he promotes the free use of urban public space and criticizes the way advertisements, architectural structures and signs regulate public behavior. He chooses to counterattack by bringing subversive forms of creativity into publicity. In one of his projects Jongeleen created stickers of hands in different positions, which, when displayed in rapid succession, form a fluent motion. He spread the stickers in cities all around the world and made pictures of the places where he left them. In a documentary, showing the pictures in rapid succession, the individual interventions became a coherent whole.

In this exhibition Jongeleen brings the street within the walls of the 'White Cube'. The works, made of discarded Ikea cupboards on which short quotes are sprayed, criticize the regulated, engineered society in which we live. The cupboards symbolize the ideas of the eighties and nineties, a time when consumers still thought positive of the future and went in large numbers to Ikea to buy their furniture. These ideas where thrown away together with the Ikea mass products.

The composition of the works shows that Jongeleen carefully selected and matched his material. The layout of the works and the colors of the cabinet doors recall the minimal compositions of De Stijl.

Also in his texts Jongeleen refers to icons of modern art, as demonstrated by the quote on one of the pieces: At least before we used to have real artists like Mondrian, Rietveld, Van Gogh etc.. Jongeleen finds many of his texts on Geen Stijl, a weblog that publicizes sharp opinionated pieces focused on news, actual events and politics. He selects opinions on contemporary art, spraying these quotes onto the sterile minimalistic surfaces of his artworks. The texts critically address the economic underpinnings of contemporary art, framing the latter as a complex system of patronage that forges its own exclusive habitus and undermines the freedom and creativity of art. Through this Jongeleen asks attention for the public ideas on art.

Jongeleen’s work is clearly inspired by the ideas of the Situationists International (SI), a revolutionary group founded in 1957, which reached its peak of influence in the general strike of May 1968 in France. During the Paris uprising the influential leader of this group was the writer and theorist Guy Debord (1931-1994). His influential and renowned work The Society of the Spectacle is considered to be the cause for the uprising.

Like the Situationists Jongeleen turns against mass consumption and over-regulated society by interrupting the public space.

Utilizing means and visual forms associated with guerilla protest – graffiti, stickers and placard cut-outs – his interventions draw attention to a particular form of militant activism while questioning the nature, value and transformative potential of artistic production. 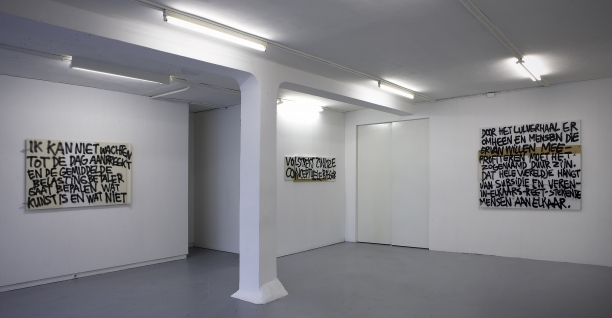 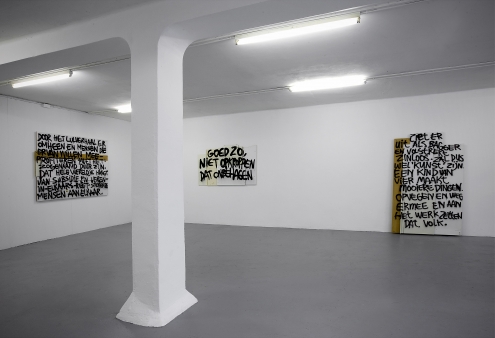