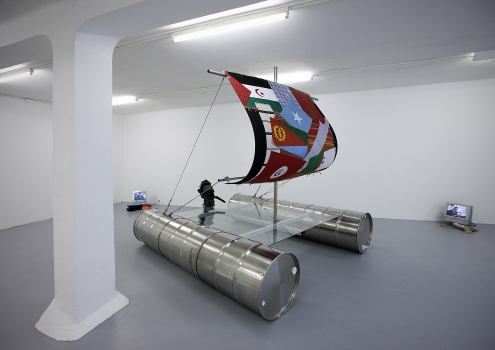 The work of Lucy Wood is based on issues dealing with social, political and environmental entrapment. Wood has currently been focusing on migration and the most well trodden migrant routes in the Western world. The migrants are trapped economically at home but also are still often trapped on route and in their circumstances in their final destination. Wood questions the idea of the audience own identity if switched into this environment themselves.

In her new show Vicini Lontani / Distant Neighbors at Upstream Gallery, Wood documents the migrants’ journey across unmapped territory between two politically opposite landscapes. North Africa and Lampedusa Island, Italy or ‘the port to Europe’ as the immigrants call it. According to Italy’s Interior minister Roberto Maroni, this year nearly 20.000 North African migrants have come ashore in Italy. The majority have arrived on Lampedusa, a tiny island with only 5.300 local inhabitants. The last 2 years Wood regularly travelled to Lampedusa to collect and document ‘migrant material’ through interviews, photography, film and found objects.

In 2009 Wood made a show called Vecinos Distantes / Distant Neighbors documenting the migration of Mexicans and Central Americans from Mexico to Arizona USA.
This new project focuses on a European geographical location, which uses the natural border of the ocean. It represents similar economic and political issues faced by many along the Mexican/US border of the desert.

Central in the show is the installation of a migrant raft. Made out off chrome oil barrels, used as floats, a glass platform and an old burnt-out 4hp outboard engine it is representing the fragility of the crossing and the dangers associated with overloading the vessel with human cargo. The sail, made from traditional African cloth and North African flags, maps the geographical reference to the piece, and its dysfunctional mast adds to the chaos of this crude vessel.
The work references the plight depicted in ‘The Raft of the Medusa’ by Theodore GeÌricault. Wood used new materials to represent technology in her raft, but the piece reflects the very same plight as suffered by those on the Meduse nearly 200 years ago. The raft also represents a trap as it not built to withstand deep ocean conditions. Much like the boats used in 2011 and depicted in this exhibition.

A number of monitors surround the raft screening the migrants stories of survival, Fisherman’s tales of rescue and the consequences to there livelihood. The Commander of the Lampedusa Coast Guard and local Lampedusans' all speak out across the raft, the audience being trapped in the middle left to stand and absorb the Chaotic situation expressed'.

Families often sell their valuable possessions to send their brightest child to Europe. The people traffickers' fee can be as much as €2,000 (£1,800). Human beings adrift at sea are not toxic cargo. From time immemorial, human instinct was to save lives endangered at sea. Instead, today, on the assumption that boats in distress carry migrants and refugees, other ships pass them by, ignoring their pleas for help. Government disregard of international duties represents only part of the problem. There is no doubt that ruthless people smugglers bear much of the blame for the thousands of deaths that occur each year in the Mediterranean, the Gulf of Aden, the Caribbean, the Indian Ocean and elsewhere. The disincentives for responsible behavior became paradoxically clear when fishermen who helped seafarers in distress were made to face criminal charges, rather than receive praise for saving lives and fulfilling a duty clearly spelled out in international law and common humanity.

After the ship struck the reef off the coast of Africa, passengers clung to makeshift rafts. Ropes were cut leaving people adrift at sea eating bits of leather and one another. Fifteen out of more than 140 were rescued; only 10 survived. Their account of events shocked the world and public outrage grew. Fingers were pointed, and accusations made against the captain, the crew and the government.

The story and its aftermath could well have been ripped from the headlines today. But the year was 1816, when the shipwreck Meduse grabbed the attention of a disgruntled post-Napoleonic France. 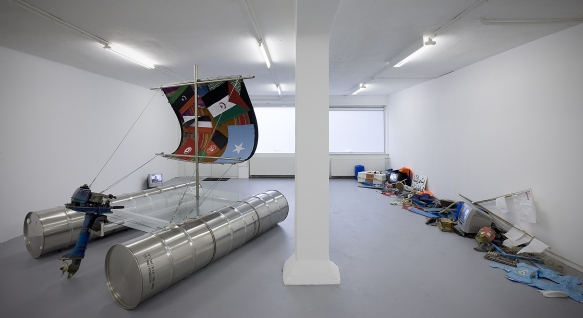 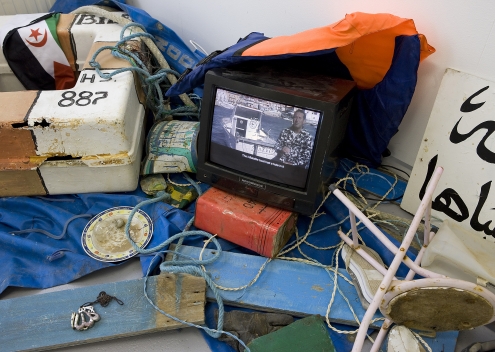