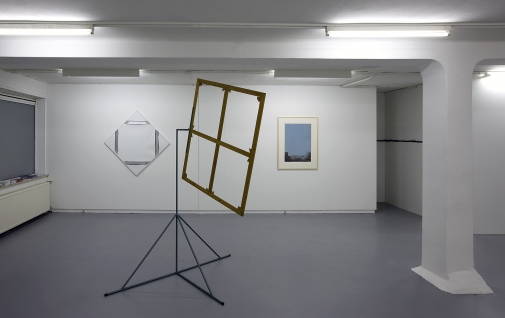 “The horizon, a phenomenon which is at the same time close and tangible as far away and elusive, as defined and limited as grand and eternal”

Upstream Gallery proudly presents the Mapping the Horizon. In this groupshow the work of conceptual artists who have their roots in the 1960s and 1970s is combined with recent work of a younger generation. On show are early and recent works of Marc Bijl (1970), Marinus Boezem (1934), Ger van Elk (1941), Jeroen Jongeleen (1968) en Luis Camnitzer (1937).

Marc Bijl shows works inspired by the Stijl movement, Mondrian and an interpretation of the famous “Zig-Zag” chair, designed by Rietveld. Mondrian maid a reference to the horizon in his work with increasing abstraction and thick and short lines on a blank area. He abruptly broke with the metaphor of the window. Bijl on the other hand has cut the lines out of his work ‘White Power, Lozenge composition II with structure’ (2011). The lines are literally cut out the canvas and as a result the underlying structure of the stretcher bar are visible.

Marinus Boezem makes in his work ‘Wentelpaneel’ (1966) a more conceptual approach to the landscape and the horizon. An unstrung stretcher is attached to a tripod. The rotatable stretcher illustrates the illusion of space, presented as a manoeuvrable object in real space. Boezem’s conceptual approach is also brilliantly portrayed ‘Della Scultura & La Luce’ (1985). In this work the relief of the Mont Blanc-massif is placed on the bottom of a round box. The inside of the cover shows an image of the northern starry sky. When the box is closed the peaks of the mountains touch the sky. Heaven and earth come together in the darkness. The horizon comes into being when the box is closed and the actual work of art can only exist in the mind of the beholder.

Ger van Elk is represented with a manipulated photograph, which came into being as a result of an exhibition in the Museum Boijmans Van Beuningen in 1999. For this exhibition Van Elk made a selection out of the collection landscape paintings of the museum. The museum appointed Van Elk as ‘guest curator’ but Van Elk gave his function a highly personal interpretation. “I have chosen twenty 17th century paintings, which all have a straight horizon, such as works of Van Goyen, Van de Velde, Avercamp, Hobbema. These works will be hung in such a way that their horizons will be in line. A panoramic sight of 12,5 meter will come into being. On the opposite wall I will do the same with 19th century paintings of among others the romantic painters Mauve, Weissenbruch en Jongkind. In the works of these artists you can see the influence of their 17th century predecessors. Those paintings will also be hung in the same way, but upside down. The sky will be under and the earth above. This arrangement will give the impression of diagonal reflection, but also something else is happening. As a spectator you are used to see the sky above, that the complete picture will turn in your mind. If you like it or no, the clouds become water and the upper side becomes the sky: trees become clouds, sailing boats become clouds, the grass-land becomes a thundery shower. It will be hard to see this arrangement as an exhibition. I consider this exhibition as a work of art, my personal statement. I use these works to realize my own artwork.”

Jeroen Jongeleen also makes a contemporary ode to the 17th century Dutch landscape painting in his work ‘Dirty Line as a Landscape’ (2008). With dust and dirt, coming from his shoes, car- and bicycle wheels, he makes a line on a white canvas (170 x 245 cm). The strokes remind us of skid marks but together they form an iddylic horizon.

Luis Camnitzer makes in a poetic way new references to the vacuum in his work ‘The Invention of Rain’ (1978) and ‘The Discovery of Geometry’ (1978). Photographs in which he forms a horizon with his hand, in front of a cloudy sky. In this work he acts as a god, bringing out the rain and a geometrical patron of clouds.

More photo's from Mapping the Horizon can be found here. 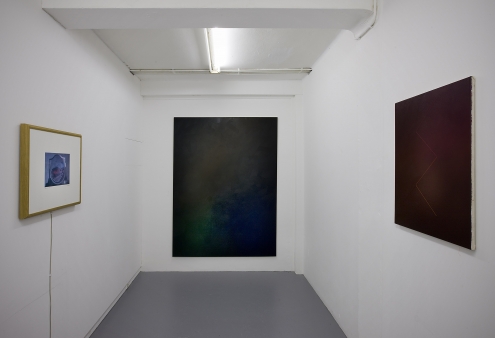