The Myth is Everything 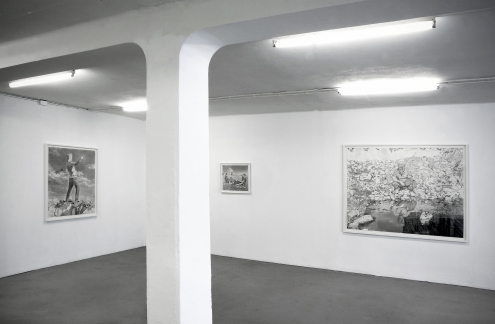 Upstream Gallery presents 'The Myth is Everything', a solo exhibition by David Haines.

At first sight the detailed, almost hyper-realistic drawings of David Haines seem to have stepped out of some bizarre book for adolescent boys. Images found on line form the basis of his compositions depicting young men absorbed in mysterious, cruel and fetishistic situations. Employing references to medieval and early renaissance illusionism, the drawings defy their original digital, throw-away nature. Through the painstaking process he employs, Haines achieves what he calls a 'pre-photo realism', affirming drawing as a timeless and essential form of human expression.

"Haines's drawings have all the delicacy that the art of drawing demands, combined with a brutality that erupts in a world only slightly diverted from that of the 'feral' youth caricatured by tabloid newspapers" Brian Dillon 'On the elements of Drawing'

Haines is particularly drawn to the imagery and fashions of the 'scally' street culture of northern England, where the logo or brand name is of paramount importance. He plays with these names, such as Osiris, Reebok Classic and Nike Air, often taking them, literally, at face value. As a result, his work seems to refer to both ancient myths and present day culture. In this way the virtual realities of both past and present are infused together. Taking this idea of mythology further, Haines seeks to disclose within each image its own 'mythological' structure, the mythological thought that Claude Levi-Strauss saw as that which "always progresses from the awareness of oppositions toward their resolution". This simple theory provides the structure around which Haines combines the elements he finds. Through his theories on myth Levi-Strauss sought to discover a universal human language. In his drawings Haines seems to be implying that, in the age of the internet, we may have found just that. 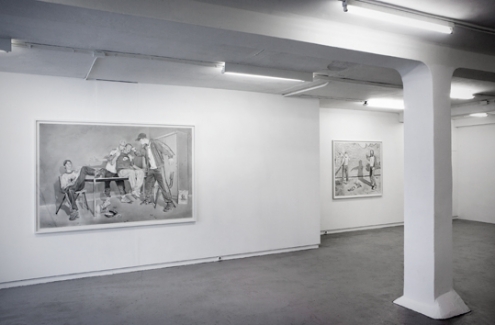 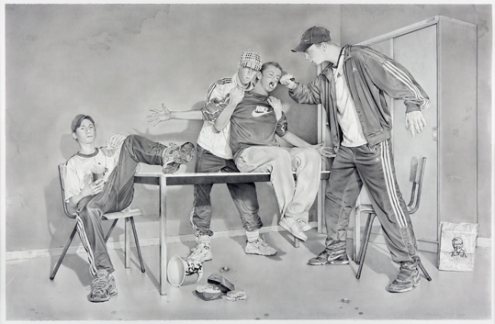