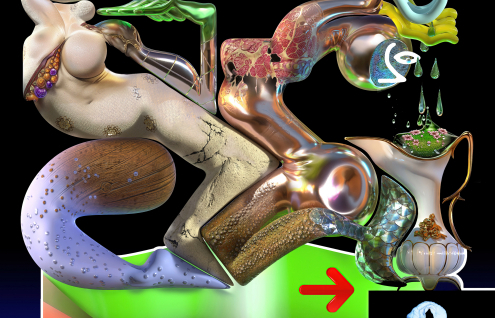 Kévin Bray (Corbie, FR 1989) is a French artist currently living and working in Amsterdam. His practice focuses on breaking and combining narratives and techniques of our past and present, in the aim of debunking realities of our fictions.

This exhibition will showcase the latest developments in the artists’ interdisciplinary practice. The exhibition comprises sculptures, paintings and video projections, all of which are composed to interact mutually and which form the intricate fabric of a multi-media installation. This interrelation of mediums, narrative techniques and tools is important in depicting and directing the experience of the works themselves and reflects essential strategies of Bray’s artistic practice.

In The Collective Shadow, Bray’s works and installations guide us through an exploration of a universal entity and a historic figure: the Monster. The concept of the Monster has been introduced to all of us, one way or another. Yet, only by looking at the etymology of the word monstrosity do we begin to understand the potentially complex roles that monsters play within society. Monster derives from the Latin, monstrare, meaning “to demonstrate”, and monere, “to warn.” Thus, in essence, monsters are demonstrative. They reveal, show and make evident —often uncomfortably— the cultural or psychological characteristics that we as a society find difficult to acknowledge.

Bray’s work is distinguished through multi-media approaches, particularly the technique of projection/video mapping. In which a projector is used to cast light on arbitrarily structured surfaces in a tailored way, seamlessly layering the projection like a new skin to interact mutually on top of our physical reality. Reverberating this methodology and play between obscurity and projection, with The Collective Shadow Bray expands on this interrelation of light and darkness as a metaphor to consider our larger collective challenges.

Throughout the past decade we have had a resurgence of monsters.They seem to act as an important social tool, able to embody abstract contemporary and often collective fears, dangers and anxieties. These monsters in some cases exemplify Carl Jung's  collective shadow. In Jung’s analytical psychology, the collective shadow is defined as what has been hidden inside of ourselves collectively because it is repressed, denied or unintegrated. Within his practice, Bray adopts the climate crisis and fossil fuel energy consumption as examples of this expanding shadow. The complexity of relations and our dependency to production processes with high polluting emissions explain our in-action towards climate changes. Such a massive problem eludes us in our short-sightedness and doesn’t seem to fit our political and social agenda, which is drastically shaped by a global neoliberal way of seeing the world.

In the first room of The Collective Shadow, blinded by the symbolic spotlights of our spectacle-driven society, two characters converse unintelligibly. In the background, their shadows hectically grow and
experiment within the limits of their elemental powers and tools. The ever-growing complexity of this world’s dynamics provokes unbounded natural reactions that are ever more primitive and elemental. And through these catastrophic acts, we come to see that our contemporary monsters are the ones we have already been introduced to during childhood—Water, Fire, Wind and Earth— the elements that create life, are today’s increasing dangers.

In the second room of the exhibition the 4 light boxes on display depict these 4 elemental monsters. Shadows can only be exposed in the presence of light. As the light in the quadriptych turns off, the four monsters reveal the elemental powers that are composed of all the paintings displayed facing them on the opposite wall. As a fundamental method within Bray’s paintings, this technique, as a form of art that created novel ways of storytelling by introducing a proto visual hypertext, has been inspired by the work of Arcimboldo. An artist who made portraits of Vienna’s monarchy with paintings composed of what they possess and the discoveries they have made in the “new” world (some of them being under the theme of the four seasons), in addition to Indian composite art that seems to be representing interdependence, wholeness and unity.

Kévin Bray is initially trained as a graphic designer with two MA degrees obtained in both France and the Netherlands, Bray soon after became an artist in residence at the Rijksakademie van Beeldende Kunsten in Amsterdam (2018–2019). There he cultivated his practice as an independent visual artist within the contemporary art arena.

Image: Kévin Bray, It is filtering its needs, 2022