do you believe in life after love? 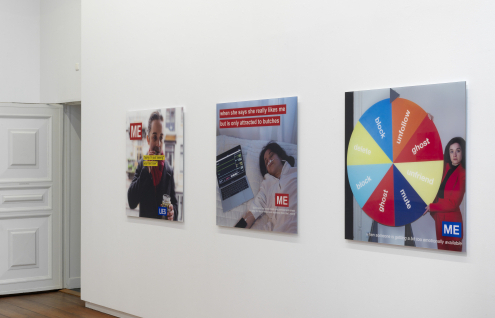 Upstream Gallery is pleased to present do you believe in life after love?, Marijke De Roover’s first solo exhibition with the gallery. Marijke De Roover (BE, 1990) is a performance- and visual artist who lives and works in Brussels, Belgium. The exhibition brings together new video work and a new series of memes in which the artist takes the leading role.

In this new series of Memes, the artist takes her exploration of self-exposure through confessional autofiction one step further by producing comic diy ‘self portraits’ copying images circulating in popular culture that display an uncomfortable subtext of cultural standards such as success/failure, femininity, desire, etc. In this way she revisits earlier ‘selfie’ work and moves it into a more advanced and florid kind of self-portraiture through which she explores female and queer sexuality within the heteropatriarchy. Claiming that at least she owns the rights to herself. To use her own image.

By appropriating a.o. the classical reclining nude and contemporary paparazzi photography, or reimagining herself as ‘animal - not human’, De Roover reclaims her body as a political battleground, questioning our relative freedoms in the age of digital capitalism. We have moved from the physical prison to the digital prison and it directly influences contemporary sexuality. Apps can be considered to be the new organs of sexuality.

As in the previous (ongoing) series, the ‘unsuccesful’ (because non viral, niche) memes deal with ideas of a wide variety of coupling practices (e.g., dating, marriage, and heartbreak) that secure the intersection of several consequential social hierarchies including gender, class, sexual orientation and institutional power.

*Niche Meme: A genre of highly stylised memes, particularly on Instagram, where the memes made are specific to the creators own life experiences, often related to mental health but overall tackle relatable taboos that people don't like to talk about in real life.

Although it may seem so, De Roover’s work is rarely about her personal life. On the contrary – because the artist, throughout her practice, has constantly been adopting new disguises, it is not at all clear who Marijke De Roover really is. In this way she sheds light on an important tendency that, with the rise of social media, has had a far-reaching impact on the behavior and perception of the individual. In a world where everything revolves around performance and the construction of a digital façade, however, failure is never far off. The glorification of failure runs like a red thread throughout De Roover’s work. The heteronyms (a term coined by Pessoa to define the series of invented selves as autonomous agents with their own specific interests, literary styles, biographies and physical physiognomies) she fashions are often grotesque, vulgar, or pathetic. Usually they’re not particularly successful, and have been known to sing off-key. Talent, however, is no prerequisite for attracting attention, as demonstrated by countless uninspiring reality-TV stars. These people are not famous for their extraordinary talents or notable deeds, but rather for the way they present their image. De Roover’s work constantly balances on the thin line separating fame and failure – never quite good enough, always on the verge of the wrong.

By using social media the artist questions a number of norms that are deeply rooted in the art world, such as the art as possession, the assumption that a museum is necessary for declaring art to be art and assignment of authors’ rights. The importance given to authorship reveals the customarily accepted relationship between reality and representation. Authorship seems to stand for authenticity, which is important because our sensibilities are well-attuned to how information can be manipulated and substituted for the real. “It is no longer a question of imitation, nor of reduplication, nor even parody. It is rather a question of substituting signs of the real for the real itself.”

Now that blogs and social media serve as legitimate gallery spaces and exhibition platforms, and the artworks presented on them are widely circulated via networks, authenticity becomes irrelevant. In De Roover’s work, collecting, copying, and pasting together digital material becomes an important artistic strategy. The dissemination of her images through the internet often coaxes accusations of artistic appropriation and copyright infringement.

The Internet, however, offers not only a democratic way of producing art, but also allows art to be reintegrated into daily life via social media. In this way, her use of mimetic language or memes can be understood as an aesthetic manifestation of Marxist principles, with artists rejecting art as the creation of unique, extraordinary, and highly valuable objects created by an exclusive group of people and to be owned by an economic and social elite. Instead the focus is on collective processes of art-making and ownership: Memes as something ideally made, distributed, and owned by everybody, aiming at the creation of work that is cheap and easy to produce, and consequently available without limit and economically worthless. An attitude rather than a product.

The body is treated not as property, but as relationship, which means then that identity (sex, gender, orientation) is not essential but relational. 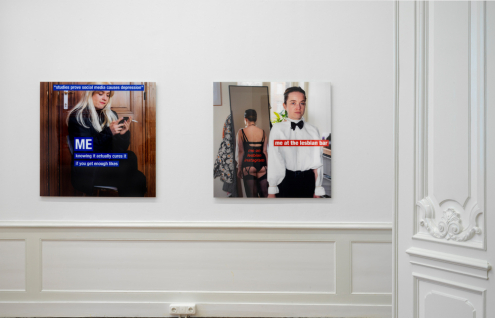 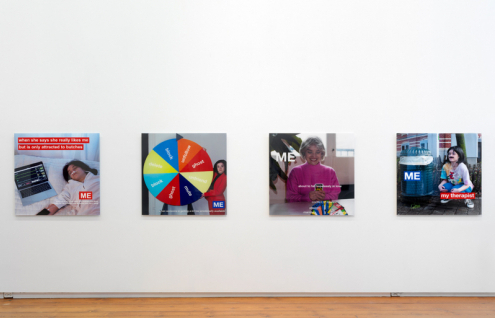