“Like a 21st century Richard Long on steroids.”
Edo Dijksterhuis (2020)

Upstream Gallery proudly presents Running In Circles [Corona II] / Movement And Politics In The Streets Of My City, 2020-2021, the fourth solo exhibition of Jeroen Jongeleen with the gallery. Jeroen Jongeleen’s work generally evolves in public space. He leaves traces in the urban landscape which he subsequently documents with photographs and films. With his interventions he promotes the free use of urban public space and questions the way corporate influence, advertising, architecture and regulations limit and direct a citizens’ behavior. Jongeleen describes his motivation to create art as not about 'decoration or making people happy, but about free speech and movement, about opposition as the essence of a truly vibrant democratic society'. His politically motivated work therefore sets out to illustrate the power and the dynamics of the street, while offering an utopian vision for the raw future.

Jeroen Jongeleen dealt with 2020s challenges through running. During a self-imposed confinement during the first “lockdown” in March, he started to expand his running trace sequence more intensively than before. Jongeleen withdrew himself from the public and retreated to deserted urban places in and around his city Rotterdam, which brought him surprising material for this lockdown series. The second lockdown of the past months resulted in an acceleration of urban explorations and new running works.

Jeroen Jongeleen stated: “I’ve been creating art from running over the last few years, starting from doing long distance and then ultra long distances runs in straight lines and other shapes, then came to the essential form of a small circle, a simple challenging loop, leaving a temporary trace. A trace by effort. The effort of creating something through a basic gesture and concentration. There is not much room for distraction while running a 12 meter circle for some hours. During the corona-period, with everyone and everything boxed up, I had more time and more empty city at my disposal. However, with the parks being closed or limited access, I sought alternatives, ending up running on abandoned parking lots, building rooftops, and other no-go city sites. As an active citizen, the vandalistic gesture of leaving a mark on the fabric of regulated space, is an invitation to my fellow citizens in the free and unlimited usage of our surroundings.
At the same time on a very practical level, with people sick around me, running allowed me to take care of my health as it forces you to be hyper focused on the basics of breathing and keeping your joints working. As self-invented covid pseudotherapy.”

Jongeleen’s hours and hours of running in circles are documented by a drone. This results in silent recordings of the solitary, intimate performance. A performance by the artist who is trapped, stuck in a hamster-wheel of his own making. An analogy could be made here with the pandemic, which can be seen as a disaster of our own making, keeping us stuck.

The influence of art history is evident in the work, from the anti-authoritarian Situationist International movement, Fluxus and Dada to Land Art and Conceptual art interventions by Richard Long, Gordon Matta-Clark, and Robert Smithson, as well as the mundane repetitive early works of Bruce Nauman or the endurance performances of Marina Abramovic & Ulay.

Another way of leaving traces are the statements Jongeleen spray paints on fences, walls and other public surfaces and which he documents through photographs. The often almost apocalyptic quotes used, are taken from newssites and -paper and reflect on the insanity of global contemporary life and politics. Like the running traces, these statements - “what I think of while making my circular drawings” - are also quite temporary. They are usually removed in a few days by the municipality, confirming Jongeleen’s ideas about the power dynamics of the street.

Jongeleen’s videos and text works during the first corona wave in the Netherlands, in the spring of 2020, were on show earlier this year in the new exhibition and performance space of Atelier van Lieshout (AVL Mundo): de BarBAAR, where Jongeleen was awarded the Brutus Art Prize. The new works are now presented in Upstream Gallery’s classical 17th century space, a complete opposite to the raw and industrial spaces at AVL, giving the works a more classical, institutional art context. 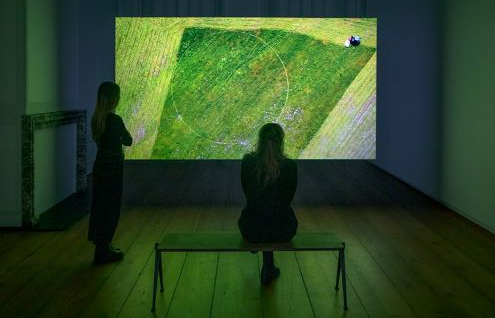 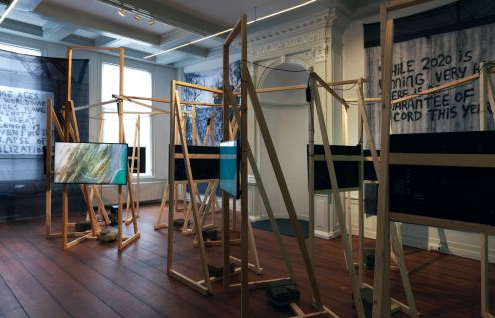