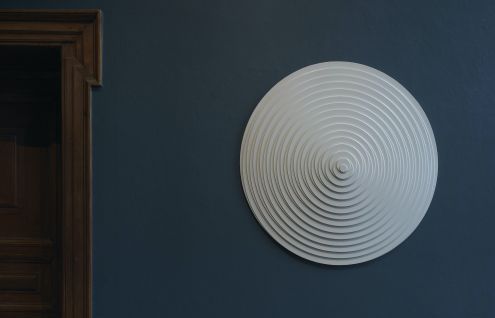 During Amsterdam Art Weekend 2019, Upstream Gallery proudly presents a selection of historical works by Ad Dekkers and Marinus Boezem, combined with one of Rafaël Rozendaal's recent Shadow Objects in the private viewing space.

The works of these artists show not only stilistic similarities, but Dekkers, Boezem and Rozendaal also a share an appetite for radical new ways to make art. They are, or have been, the leading Dutch figures in some of the most important developments in modern and contemporary art: geometric abstraction, conceptual art and internet art. The pieces in this presentation all play with the concept of light and shade and the point of view – or the perception – of the viewer.

In the early 1960s, Ad Dekkers (1938- 1974) became known for his thorough investigation into the plane, the shape and the line. Dekkers most often started his works with a circle, square or triangle, connecting his work to pre-war artists such as Piet Mondriaan, whose view he shared that the most universal concepts could be expressed with the purest possible visual means. From 1965, he started making reliefs in editions, often cast in polyester. By painting his reliefs monochrome, and mostly white, the effect of light could be optimally utilized.

Ad Dekkers participated, together with Jan Schoonhoven and Peter Struycken, in the 1967 Biennal of Sao Palo with this work, Variatie op cirkels no. V. This work is one of the first of Dekkers using the circle. The circle attracted him very much as a form because of its formal characteristics, the lack of angles, a clear direction, the presence of an all-round symmetry, but probably also because of its significance of perfect form par excellence determined by long cultural traditions. Dekkers is not officially part of the Zero movement, but his work has many similarities, such as, in this work, the repetition principle. However, the work distinguishes itself by an emphasis on the form and manipulation of that form. The work was also included in Dekkers’ solo exhibition at Gemeentemuseum Den Haag in 1972.

Marinus Boezem’s Manzoni (1973) is a framed sheet of white paper. In the middle of the glass the name MANZONI is etched in capital letters. The shadow cast by the name falls on the white sheet in different places, depending on the angle of light. Manzoni refers to Manzoni’s Achromes. In his Achromes, begun in 1957 Manzoni sought to eliminate any reference to narrative, including color. Thus he titled his work “achrome” or “without color”. These Achromes were again a reference to Yves Klein’s Monochromes. Both Manzoni and Klein inspired Marinus Boezem and the conceptual art movement like no other.

Elements from Boezem’s early videowork (Breathing on the Picture Tube), recur in the piece God Bless You. This work consists of the instruction to exhale onto a mirror, write the text ‘god bless you’ in the condensation and wait until the reflection of your face reappears.

Rafaël Rozendaal’s series of Shadow Objects consists of stainless-steel plate with laser cut shapes. For these works, an industrial algorithm is used to calculate the composition that delivers the most efficient use of materials. Like his works based on the lenticular technique, the composition is further influenced by its illumination and the point of view. With an emphasis on the dynamic potential of shading, the series bears a close resemblance to the traditions of ZERO, translated into the twenty-first century.