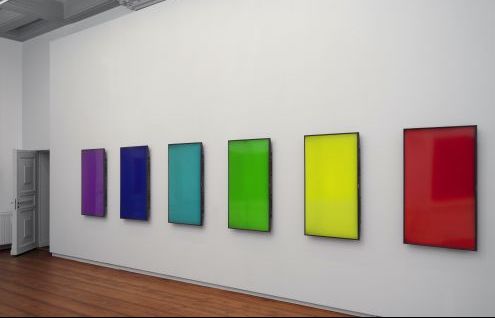 A discrete object has known and definable boundaries. It is easy to define precisely where the object begins and where it ends.

In this last decade RafaeÌˆl Rozendaal has made a name with his artworks in the shape of websites through which he reaches an audience of over 60 million unique visitors a year. In his third solo exhibition with Upstream Gallery, Discrete Objects, a group of four new websites is presented as well as the monumental new installation Spectrum and a series of 3D tapestries, for which Rozendaal developed a weaving structure that animates the canvas like a screen.

Discrete Objects brings together works, in which Rozendaal continues his investigation in the transition from movement into abstraction and from virtual into physical space. He explores where the digital can be found in the physical and vice versa. Where screens and the internet are usually there for distraction, for grabbing attention and for endlessly scrolling away, paintings are there for focus and contemplation. The minimalist works in this exhibition exist in an area in between, where these states of mind overlap.

Spectrum is a new 6 screen installation of monochrome videos, each playing an hour of one color. It is a fundamental research into color in the digital space. Where digital art is often considered as a medium that is immaterial, the importance of the hardware that is needed for the presentation of the work is sometimes overlooked. Spectrum investigates these physical implications of digital work - it shows the physical irregularities of a medium that seems non-physical. It reveals the imperfections of the screens. The installation is not device-specific. The work is instruction based and the screens are replaceable. Each generation of screens will have different imperfections and will show slightly different colors.

In the past years, Rozendaal has been translating his digital work into physical art objects. This has for instance resulted in a large body of work that makes use of the lenticular technique, providing a way to create a moving image without the use of electricity. In close
collaboration with the TextielMuseum Tilburg, Rozendaal has now developed a new weaving structure that is based on this same principle.
The Near Next tapestries are mechanically woven from linen, and evoke a sense of movement when the viewer walks past it. Although the tapestries consists of only two opposing colors, the physical irregularity of the material creates a very lively and organic image. This is reinforced by the use of linen, which is used as the basis of most paintings. In these weavings, the linen is saturated with pigments. Even though there is no paint applied on the surface, the lenticular linen still gives the works a painterly character. The weavings behave in fact as analog screens with a very simple algorithm: one color or another, A or B, 1 or 0. They deal with interactivity in the most basic form: the image changes along with the point of view of the observer.

Rafaël Rozendaal has made a name with his websites as unique artworks since 2001. Websites have distinctive qualities that no other art medium has: they are publicly accessible, unique “objects” that exists all over the world at the same time. Unlike video, these websites have no beginning or end. They are infinitely generated via algorithms. These sites constantly create new abstract formations, which produce chance juxtapositions when displayed next to each other. By showing the same website as four instances on four screens, the unpredictability of the algorithm is felt by the viewer. Rozendaal compares his websites to waterfalls: they are always doing the same thing, but they never repeat themselves. The abstract websites provide an almost meditative or hypnotic experience. They function as endpoints on the web. Not places to endlessly scroll but to endlessly stare. They provide a moment of stillness in the chaos that is the web.

Rafaël Rozendaal's Shadow Objects are works of deceptive simplicity that fluctuate between an image and an object, a drawing and a sculpture. In what can be considered the shortest path from digital to physical, Rozendaal creates shapes which are coded to be cut by computer out of rectangular plates of white steel. Just like Rozendaal’s lenticular tapestries in this exhibition, the composition is further influenced by its illumination and the point of view. With an emphasis on the dynamic potential of shading the series can be seen in the tradition of artists like Lucio Fontana and Jan Schoonhoven, translated into the twenty-first century. The works mirror the digital realm, where drop-shadows lend the illusion of presence and form to immaterial, virtual objects. These contemplative voids and the shadow objects they create counter the cacophony and information overload of online life.

Rafaël Rozendaal’s Haiku are short poems inspired by the Japanese tradition. The compact poems range in subject matter from touching existential musings on the complexities of the digital age to the mundane pleasure of ignoring emails or getting paid on time. Rozendaal sees similarities between Haiku and computational processes: each time the haiku is read, a moment happens, the algorithm runs, the three lines of code start a process in the mind of the reader. Haiku 274 is like a diagram. Like the tapestries in the exhibition change from one color to another, the three lines of text change from nothing to something to everything. 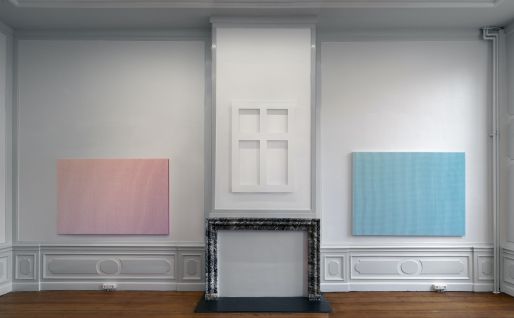 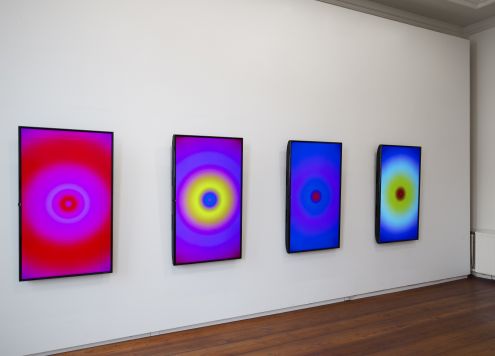