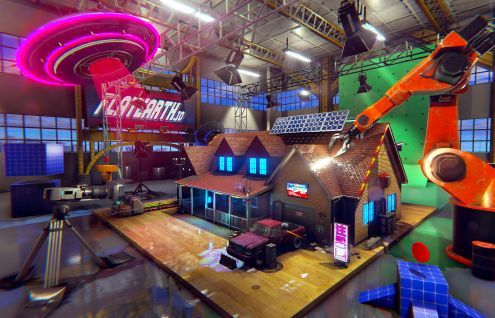 Upstream Gallery is proud to present FlatEarth.io, the first solo exhibition of Tabor Robak in the Netherlands. Tabor Robak (1986, USA) lives and works in New York and is known for creating multi-channel video installations and procedurally generated animations that have been exhibited in venues such as the Museum of Modern Art (MOMA) in New York, the Serpentine Galleries in London, the Museum of Contemporary Art (MCA) in Chicago and the Museum of Contemporary Art in Tokyo. His work is included in numerous public and private collections, including those of The Museum of Modern Art (MOMA) and The Metropolitan Museum of Art (MET) in New York.

In this exhibition Robak will show multiple monumental multi-screen installations. The technological interfaces of these screens might look similar to contemporary video games, but in reality they are exponentially more elaborate. Robak has been recognized for his intricate, animated digital works, so detailed and meticulously constructed that they took months to compose. For his virtuoso computer work rendered in excruciating, hyper-real detail, he has been called the Michelangelo of digital art, or, ‘Pixelangelo’. The artist’s virtuoso workmanship should get noticed when approaching his work closely. He said, “I like thinking about the materiality of digital work. That is why I love screens as opposed to projections, because you can get close and see that tiny flickering pixel. I try to draw attention to the physicality of the screen.”

Tabor Robak is the most compelling artist today working with computer-generated imagery (CGI). In the realm of fine art, his type of work has for a long time been ignored. It has usually been relegated to popular films and television, anime blogs, sci-fi and fantasy forums. Like an Italian Renaissance Humanist, Robak raises the craftsmanship of CGI to the standing of a more intellectual liberal art. He is one of the first to critically look at the possibility of CGI, about which he has said, “I want to be generous to the viewer. Sometimes that requires a deliberately excessive aesthetic: opalescent, sparkling and abundant. I want my work to touch the viewer, like an advertisement, but hopefully with a critical edge.”

In the exhibition there will be two brand new installations with Robak’s latest work. The title of the exhibition is also the title of the largest piece in the exhibition: a sixteen screen video wall that shows a procedurally generated simulation of a competitive multiplayer home building game. Within the fiction of the art work, Robak has imagined an artificial intelligence working backwards to recreate scenes of American life and people based on traces of data: bank account ledgers, census data, biographies, etc. The software by the artist generates these families and people, again and again. Like the parable of ‘the blind men and an elephant,’ there is never one true narrative about American life generated by the AI. Every time it loads different data from its database and generates a new perspective on FlatEarth.io. For example, one time it would generate a scene and say "oh, modern American life is like a cartoon with guns", while with different data it concludes, "oh, modern American life is like a movie about dogs."

The animated scenes of FlatEarth.io encapsulate in miniature our present-day society. The animation zooms in on strange homes through security-camera-like footage. Robak’s software creates different scenes utilizing many different themed 3D models and other assets. The themes each have their own metaphorical flavor, relating, amongst others, to the negative dynamics of our consumption society. Upon generation, each house is given a bank account with a certain balance. As the scene plays out, itemized expenses and deposits appear on the side of the screen. Robak’s animation is a computer-generated microcosm that makes us aware of grand-scale systems often invisible to us in real life.

In this most recent work, Robak’s political voice has become more articulate. In earlier works he hid his political statements under layers of imagery and symbolism, because he was scared of being misunderstood. As a young artist working 70 hours a week with computers and games he was much more concerned developing a technical ability than a socio-political one. After 8 years of intense art practice in New York City his political thought has finally begun to crystallize. Living in NYC was the perfect place for the artist to form his thoughts of American society and its people. Robak said, “We are a people evolutionarily formed in the image of global capitalism, a system that radiates out of this city.”

The second work in the exhibition is largely a soothing counterpoint to the anxiety and tension of the larger screen-installation in the other room. The viewer will feel more relaxed standing in front of the picture window that allows a view on a virtual landscape. The ever-changing landscape adapts to the time of day as well as the latitude and longitude of where it is displayed. By means of User Interface (UI) software, Robak attempts to match the virtual lighting and position of the sun with those in real life. The title Northstar is an optimistic allusion to the human desire to explore and move forward.

Northstar is a procedurally generated simulation of an infinite walk through an ever-changing virtual landscape. It brings to mind the ‘walking simulator’ genre in gaming, which has been called ‘gaming’s most detested genre’ because it seems to get the premise of video games wrong. Video games are supposed to be about running around and shooting stuff. After all, the modern form of the medium has trickled down from the military-industrial complex. However, the walking simulator genre is more focused on peace and narrative. Robak has always loved a walk through the woods. “The natural world is the perfect panacea to the bubbling anxiety of modern life,” he said. Ironically, the artist decided to try to capture this feeling in an endless virtual environment.

Robak’s work often takes on a voyeuristic quality, traveling through other people’s houses and rooms. As a viewer one gets immersed in a very indulging environment. The shiny and sparkly landscapes created by the artist remind us of commercials, trying to work with the viewer and shutting down their critical faculties. His work aims to touch the viewer, like an advertisement, but also adds a critical edge to it. Robak said, “I’ve been playing video games obsessively forever, but the fact they’re a very easy pleasure, a way to escape and not be critical – that’s something I’m always dealing with. I go back and forth between being fully immersed in the game and being detached from it and analyzing it. Something that’s great about video games is that they offer a massively visual experience. The creators of the video game are very generous to the players. They’ve created this really beautiful and detailed world and you just get to go at it, whereas artwork tends to be a little bit more withholding visually, which is what creates the distance that we like in artworks.”

In the private viewing space of Upstream Gallery, Robak shows his earliest work, Vatican Vibes, a music video for Fatima Al Qadiri’s same-titled track, which had its premiere screening at the New Museum, New York, in 2011. This piece demonstrates with ecstatic flair how the same energies that once found expression in religious art and ritual have been redirected toward consumer experiences. The work also shows the influence of gaming on Robak’s work. It’s immersive; it has an ambient storyline; it has a variety of scenes and an abundance of details to impress the viewer.

At a young age, Robak started working with programs such as Photoshop. He experimented with every tool the program offered to work with. The artist also taught himself to work in programs including After Effects, Unity (a 3D modeling program), and Cinema 4D. The result of working with these programs might look like a video game or commercial, because that’s what these programs were designed to create. The aesthetic of Robak’s work has been termed a ‘Photoshop tutorial aesthetic’. A Photoshop tutorial is mostly about the use of effects. The artist likes to draw attention to effects in his works, because they are, typically the most superficial elements of things. Effects like a ‘lens flare’, a dirty lens, an explosion, or a fog effect are meaningless, but they make his work also more attractive.

The artist’s increasing concern with technological artifice – screens, computers, programs, and code – has led his practice towards a newer mode of computer-generated imagery, one that is utterly unique to him. While Vatican Vibes is a looped animation, designed from beginning to end by the artist, in his more recent work he experiments with procedurally generated animations. The interesting feature of procedurally generated work is that you never know what is going to come. Every time you play FlatEarth.io and Northstar, the animations are going to be different than before. That’s because Robak has given his computer a large database with hundreds of different variables. The computer uses these in FlatEarth.io to procedurally generate a person’s age, gender, a whole biography, as if it had access to Facebook’s databases. In FlatEarth.io we see all the personal data popping up on the screen, including a robotic voice that tells us about the development of these people. FlatEarth.io is the artist’s first work with sound and is also the most complicated work that Robak has executed so far. 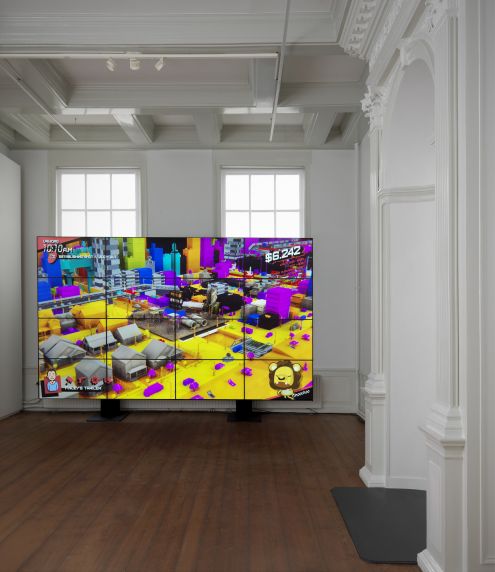 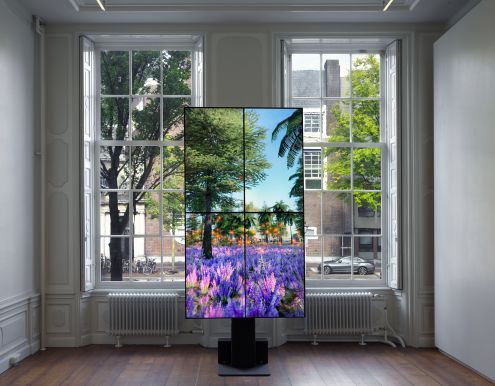