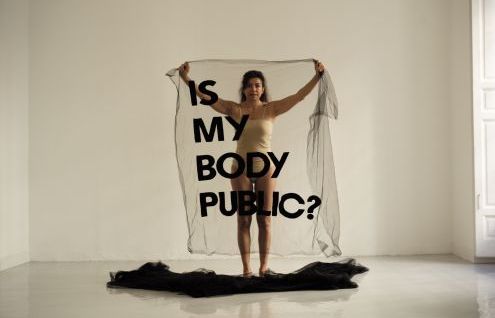 Upstream Gallery is pleased to present Forbidden Collections, the first solo exhibition by multi-disciplinary artist Alicia Framis with the gallery. Within her practice, Framis blends architecture, design, fashion and performance. Forbidden Collections brings together two collections that are designed and made for women by women.

Is My Body Public? is a collection that explores the borders between what is public and private in our everyday lives. The dresses resemble the aesthetics of women’s lingerie but are in fact banners for demonstration. The text 'Is my Body Public' is embroidered on every dress in 15 different languages, representing women worldwide. The fabric of the dresses is very fragile, and the work is subtle, but the message is strong. With Is My Body Public?, Framis questions what is public and what is still private in today’s world. Nowadays it seems as though privacy is something of the past. Our movements, both physical and digital, are followed constantly. We have given up a lot of our privacy with the introduction of the internet and with new technologies. When going through airport security we are closely searched by guards. The government collects all kinds of data about its citizens that is in fact very private information. Framis asks herself where her privacy ends. Where does the fear of the other and the need to control people by gathering as much information as possible begin? The issues of privacy and body politics that Framis discusses in this work take on a different, more specific meaning for women. Women in many countries worldwide are still not allowed to make decisions that concern their body, for example in places where women have to obey certain dressing rules or codes. At the same time women’s bodies, appearances and ways of dressing seem to be a subject that the public, in particular men, think they can publically comment on or critique however they like, for instance by harassing women in the streets. Women’s bodies in these cases seem to be viewed as public property. In many places in the world women are not able to undergo legal, safe abortions and in many places where this is possible women are judged for doing so. Here again others, often men, are deciding over women’s bodies and their sexual and reproductive rights. These are just a few examples of social issues regarding sexism and women’s rights that lead to the question Framis is posing with this work. The dresses offer a tool for women to explore different, playful ways of demonstrating important issues such as (systematic) sexism. By working together with women from different backgrounds in the performance the work gains a participatory and global character.

Framis often starts out from actual social dilemmas to develop novel settings and proposed solutions. She develops platforms for creative social interaction, often through interdisciplinary collaboration with other artists and specialists across various fields. The LifeDress collection offers a new way for demonstration against sexual harassment and violence towards women, and consists of dresses made out of airbag fabric from cars: a high tech material made in Japan with a high resistance to impacts and fire. Each dress is made to protect against a different form of (sexual) harassment, and designed to change form when intimidation occurs. The work can be seen as a social comment on gender patterns in our society nowadays. It deals not only with the more serious cases of sexual harassment but also with the general attitude that still exists amongst many men who think it is acceptable to harass or catcall women in the street. Some forms of sexism and ways of speaking about women are so engrained into our society that we hardly notice them anymore or brush them off as ‘locker room banter’. There are myriad ways in which women try to protect themselves in their everyday lives against sexual harassment and violence and these dresses make us aware of this crude reality. Framis employs elements of technology, activism and performance in this new work. With LifeDress she aims to bring women together and open the debate. Within this collection, the action is in the dresses itself, that blow up like an airbag when the wearer is inappropriately touched, confronting the perpetrator with the embarrassing realisation that what he is doing is not acceptable. The surprise occurrence is meant to set him straight. In this way, Framis discusses a serious issue, but through a surrealistic act.

The LifeDress collection is connected to Framis’ Anti_dog collection, that consisted of 23 pieces of clothing made from bullet-proof material to protect women, against violence, and with which Framis represented the Netherlands in 2003 at the Venice Bienal. Framis introduced this collection after being faced with racism while she was living in Berlin. With the dresses Framis wanted to talk about violence against women in general. The dresses were worn by women during performance protests in, amongst others, the cities of Berlin, Amsterdam, Madrid, Birmingham, Helsingborg, Venice, Barcelona, Istanbul and Paris. Sadly racism and sexism are still issues women are faced with on a daily basis. They are widespread issues affecting women all over the globe.

New ways of demonstration for women is a topic Framis has been exploring over the past two decades with works such as Anti_dog, 100 Ways to Wear a Flag and Is My Body Public?. These fashion demonstrations are tools to protest against inequality towards women.

Texts by Nina Svenson and Alicia Framis. The new collections by Alicia Framis presented in this exhibition are supported by Mondriaan Fonds and Elan Fashions. 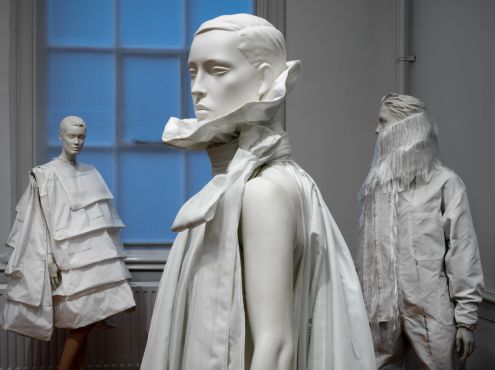 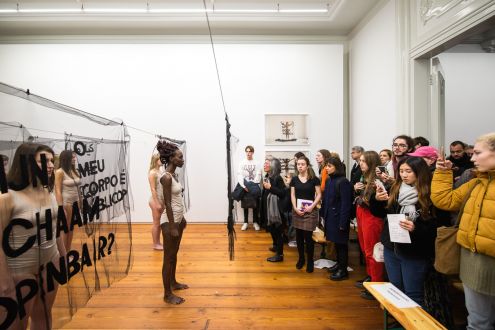