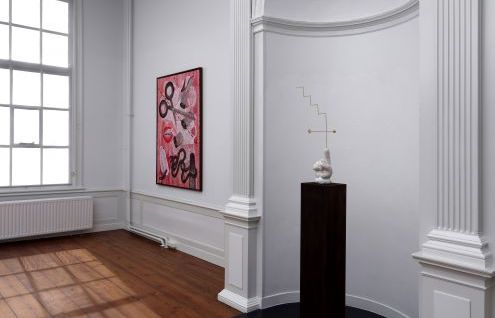 With PINK SLIME CAESAR SHIFT, Jen Liu was among the four recipients of the 2018 Art + Technology Lab Awards by the LACMA (Los Angeles County Museum of Art).

In the last decade, labor protests have increased in China, but they remain brief and localized, due to the government’s clampdown on social media. Large scale labor organizing is stymied by the inability to communicate across distances. Meanwhile, China’s resource capacity has maxed out, and shortages of beef – resulting in counterfeit beef scandals and imbalanced international trade deals – have become commonplace. If the solution to the latter problem – meat shortage – is the production of synthetic meat originating in cow stem cells (a real technology), then the bio-intensive workflow would be ideal for solving the former problem through using the meat’s DNA as data messenger. By inserting synthetic strings of DNA into meat easily decodable into lines of pinyin text, existing food distribution networks may be borrowed as channels of communication for political organization. Like Pink Slime, these messages are unauthorized hamburger additives, modeled on the oldest cryptography system: Caesar Shift.

PINK SLIME CAESAR SHIFT continues with a series of paintings, which play with various slogans and images around the idea of feminine insurrection, literalizing various concepts around labor rights, (post)colonial East-West histories, and the introduction of synthetic DNA: C, G, A and T. Their diagrammatic quality as well as their ubiquitous feminine fingers originate in the nature of much industrial production today: women pushing buttons, swiping screens, maneuvering ever-smaller parts steadily progressing to the cellular. The suffering of modern workers is internal, pathogenic: workers are poisoned equally by scentless gaseous toxins - and Special Economic Zone laws that transform them from citizens to strangers in their own country, in an instant. However, bubbling and pocked surfaces can still be empowered and complex: no simple victim, these paintings are playful analogues for the rebellious body; femininity celebrated but subjugating, ridiculous but weaponized, all at the same time.

Finally, this group of work is rounded out with the first series of wearable DNA data carriers: PROPOSAL 1/4: THE GOLDEN FILE. This is a series of golden metal nail rings with a small closed interior space, in which cow cells with chemically-introduced synthetic DNA will be contained for long-term storage. The DNA sequence of the cow cells have a bioluminescent marker that indicate where a string of data DNA begins: which is easily decoded into a short quote from Lizzie Borden’s Born in Flames, and a much longer sequence of Chinese legal code on the rights of workers. In the future, when stem cell beef has been industrially scaled, the cells can be scraped out of the ring, the data analyzed, and propagated for distribution to workers whose access to information about their own rights has been blocked by their bosses. 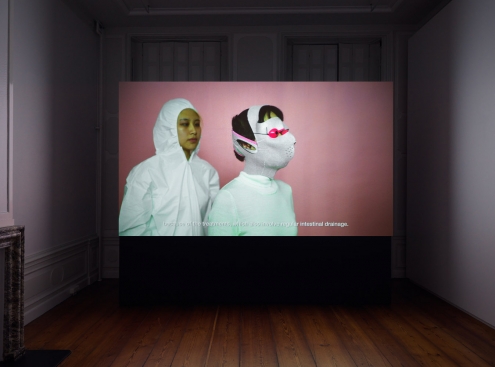