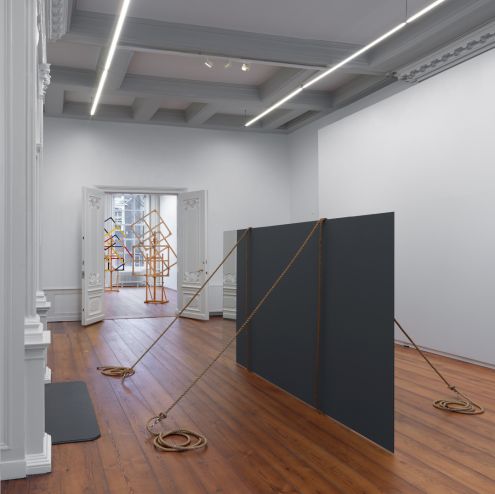 Marinus Boezem is, together with Jan Dibbets and Ger van Elk, one of the most important representatives of the Conceptual Art and Arte Povera movement in the Netherlands. In the 1960s, Boezem discovered the use of elusive elements such as air, weather and wind for his art and made a name with radical, immaterial works that were far ahead of their time. In an oeuvre spanning more than sixty years, Boezem has created a body of work that stands quite independently in contemporary art, never having confined himself to a single style, handwriting or material. As to mentality, however, his work is unmistakably rooted in the sixties: rebellious in the face of authoritarian values, anarchistic in idiom and idiosyncratic in style.

Views brings together a selection of installations that challenge the conventional notion of depiction and includes the seminal installation Space Sculpture (1977-‘91) and the never before exhibited series of Dutch Paintings (2016).

Exhibited for the first time in 1992, the Space Sculpture comprises of two vertically standing mirrors, placed with their reflecting surfaces facing each other and held in place by manila ropes that are attached to the floor with metal hooks. On the outside, the sculpture is for the most part sealed and presents itself in the space in which it is set up as a simple, grey, flat form. What it embodies however is not a physical object, but an ideation of space that only takes place in the mind of the observer. While mirrors naturally symbolize the world they reflect, the world that we perceive and reflect on with our concepts, this installation challenges this symbolic act. Instead, within the enclosed part of the sculpture and invisible to the viewer, the mirrors continuously reflect themselves, unfolding an infinite space in which they perceive an endless vacuum. As we interpret the world based on the impressions we receive, we map these impressions by naming them, and giving them an identity. In order to distinguish between different objects and to determine their qualities, we need an arsenal of concepts besides an understanding of space and time. Here, we are given a glimpse of what is often perceived as emptiness in the absence of a proper denomination. By depicting this emptiness, the sculpture shows an exploration that does not turn its back to an understanding of our world, nor to an acknowledgement of the generally accepted image thereof, that exists in the labels we provide. With this installation, the artist steps outside of the world, outside of what we know, and outside of the world that has been reduced to objects.

The series of Dutch Paintings consists of three installations that are built with wooden stretchers supported by painter’s easels. The installations playfully allude to various historic traditions in Dutch painting that the country has become known for, while nodding to the notion of painting as a window on the world: the work shows an accumulation of illusions that are not fulfilled, as one can literally see straight through them. The first of the installations shows signs of the constructive elements connected with the artistic traditions of the early twentieth century. Here, Boezem emphasizes formal elements such as composition and colour by painting the panels in the primary colours practiced by Mondriaan, Van Doesburg and Rietveld. The wooden stretchers of the second installation are stuffed with pillows, a humoristic hint at the famous clouds depicted in Dutch painting of the Golden Age. The third of the installations is left blank, only showing the empty wooden stretchers without making a direct connection to traditional painting. Meanwhile, each of the installations is provided with a small copper plate, inscribed with the words Dutch Painting 1, Dutch Painting 2 and Dutch Painting 3. This provides the works with a sense of legitimacy while again referring to historic traditions. With the series of Dutch Paintings, Boezem forces the viewer to make a constant examination of art’s traditional tools. The stretchers that are normally hidden from sight and allow the canvas to become a picture exhibited on a wall, now become the physical object around which the viewer can move and look through. Furthermore, by shifting the function of the stretcher, he offers thoughts about the boundaries between painting and sculpture, about redefining them, and a re-evaluation of the heredity of traditional Western painting.

Marinus Boezem was born in Leerdam, The Netherlands in 1934. He was one of the initiators of the ground-breaking exhibition ‘Op Losse Schroeven: Situaties en Cryptostructuren’ (1969) at the Stedelijk Museum Amsterdam and took part in the equally influential exhibition ‘When Attitudes Become Form’ at the Kunsthalle Bern in the same year. These historical exhibitions are still highly relevant: in 2011 the Stedelijk Museum organized a retrospective of ‘Op Losse Schroeven’ resulting in the acquisition of the group of works from that exhibition; key works both from the exhibition and within Boezem’s oeuvre. In 2013 a highly acclaimed remake of ‘When Attitudes Become Form’ took place at the Prada Foundation during the Venice Biennale. His work is in the collection of numerous museums including the Museum of Modern Art, New York; Stedelijk Museum Amsterdam; Museum Boijmans van Beuningen, Rotterdam; Gemeentemuseum Den Haag; Museum Voorlinden, Wassenaar; Museum Kröller-Müller, Otterloo; Musée d’Art et d’Histoire, Geneva; FRAC Centre, Orleans; FRAC Nord-Pas de Calais; Musée des Beaux Arts, Lyon. 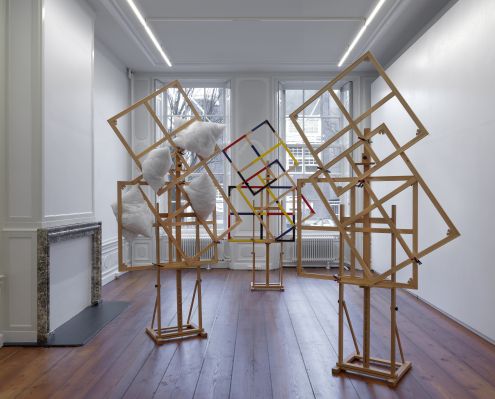