In his first solo exhibition with Upstream Gallery, Harm van den Dorpel features works from multiple series that react to different moments in the history of cybernetics.

Pattern and Presence, the title of the show, is taken from the book ‘How we became posthuman’ by N. Katherine Hayles (1999), in which she describes the historical development of cybernetics and politics of disembodiment.

Van den Dorpel employs various information technologies from this history of cybernetics in his artistic practice. He wants to demystify both the romantic notion of the ‘artistic genius’ as well as the ‘black box’ of computer algorithms, which increasingly influence our personal lives and forecast our political future. Where other traditional artistic mediums require the artist to create the work with their own hand, Van den Dorpel rather programs software and trains it by looping continuous feedback through its output in order to produce works with unpredictable aesthetic outcomes. In this hybrid process, genetic properties are ascribed to the elements and composition that make up his artworks. By selecting and crossbreeding across many generations, “optimal” artworks emerge.

For this new series of printed transparent work (which is a continuation of his earlier series “Death Imitates Language”) Van den Dorpel focuses on the structure of ‘nesting’: a strong organizing principle found in architecture, software development and human language. The artist draws on this system in order to compare the construction of language to the construction of artworks, and in doing so, refers to the painterly question of how to fill the two-dimensional plane using composition and layering. The genetic algorithms he uses, originate from developments in computer science which emerged in the 1960s through to the 1980s and include: ‘Turtle graphics’ by Seymour Papert (late 1960s); research of feedback, reflexivity, nesting and recursion (Autopoiesis, Varela & Maturana, 1972); and Artificial Life (Christopher Langton, 1986).

Van den Dorpel also draws on recent developments in blockchain technology, specifically the Ethereum blockchain, in order to assign each work a unique identifier (a hash or fingerprint). This functions as a token which can be traded on the Ethereum blockchain and changes the status of the artwork to a form of currency – or a representation of itself – which circles back to the initial question of embodiment: are the works in fact the works? Or, are they representations of an external, less material essence? Do we have a body or are we a body? 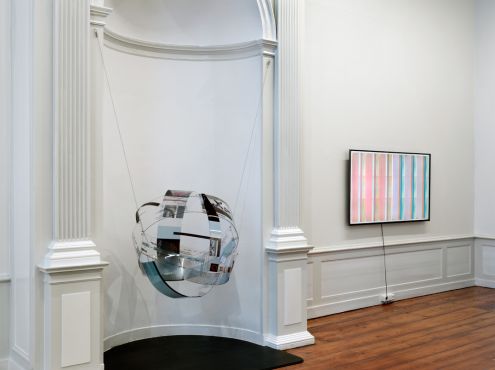