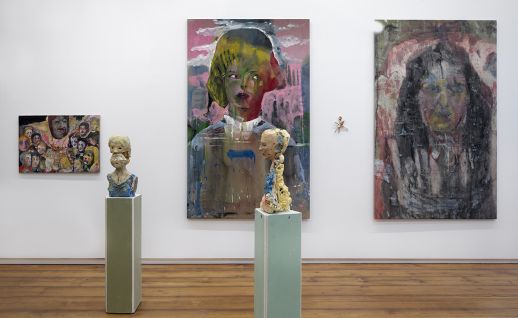 Upstream Gallery proudly presents Bones, the 3rd solo exhibition by Cristóbal León (1980) & Joaquín Cociña (1980) with the gallery. The Chilean artist duo, known for their unpolished and dark stop-motion animations, now bring together works that find themselves between archaeological remains of a lost empire, voodoo objects and waste. The exhibition includes paintings, sculptures, objects, drawings and recent video work. All of these works are the result of accidents and the material chaos of their studio.

Many objects within the exhibition are born from the production of the artists’ first stop-motion feature film La Casa Lobo (‘The Wolf House’), which the duo has been working on since 2013 and will be released in 2017. The film tells the story of Maria, a young refugee stationed in southern Chile after escaping from a sect. The film is inspired by Colonia Dignidad, a secretive and controversial sect in southern Chile established in the sixties by German immigrants. León & Cociña tell the story as if they were part of the sect. They pretend to be Colonia Dignidad’s animation film company and make the film as an indoctrinating fairy tale.

For the incredibly time-consuming production process of the film, the duo has initiated a nomadic studio project setting up temporary workshops in museums and other art institutions. Starting at Upstream Gallery in 2013 during their exhibition Flowers, the studio has traveled to Casa Maauad in Mexico City, Modern Art Museum Buenos Aires, Contemporary Art Museum of Chile and the Media Arts Biennale in Santiago de Chile among other locations. Each time, La Casa Lobo is presented as a work in progress. And by making the set part of the exhibition, the working process itself is turned into an artwork.

Different sculptures and other pieces are born from the production and the chaos of the studio that is used as set. As in their films, every object and piece of waste can be absorbed by the sculptures and objects. "We imagine that these parts belong to an exhibition that was cursed and destroyed. They are remnants of lost works, the last state of the works before becoming stone or moss.” In 2015, the artists started making paintings, often depicting protagonist Maria. Objects, paintings and drawings are made by both artist in a studio synergy. They have the rule that everything that comes into the studio can be changed, destroyed or rebuilt.

Bones also includes the latest video work by León & Cociña, entitled La Madrasta (‘The Stepmother’). It tells a nightmarish version of the story of another María: María Bordeu. She was the evil stepmother of Leon’s grandmother and happened to be Cociña’s great aunt. In La Madrasta, both artists have alter egos as little orphaned girls that are left in charge of this evil figure.

With their experimental films, León & Cociña create a new interpretation of the religious symbolism and magical rituals that are deeply rooted in the traditional culture of Latin America. The surrealistic, esoteric films of Chilean underground filmmaker Alejandro Jodorowsky but also the aesthetics of children’s fairy tales are sources of inspiration for the duo. A distinctive, unpolished cinematographic language furthermore characterizes the stop-motion films by León & Cociña. The paper mache figures and innocent-looking drawings strongly contrast with the heavy topics such as religion, sex and death that the films deal with. Influenced by psychoanalytic theory, the artists seem to tap from a nightmarish collective subconscious. Their world is populated by sinister shadows and creatures that are constantly subject to metamorphosis, and seem to come straight from a hallucination or a fever dream. Yet the atmosphere can shift quickly and the ominous creatures dissolve as quickly as they appeared. 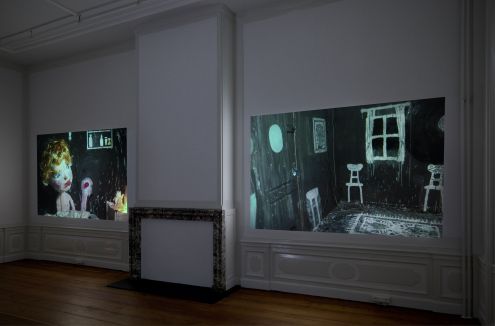 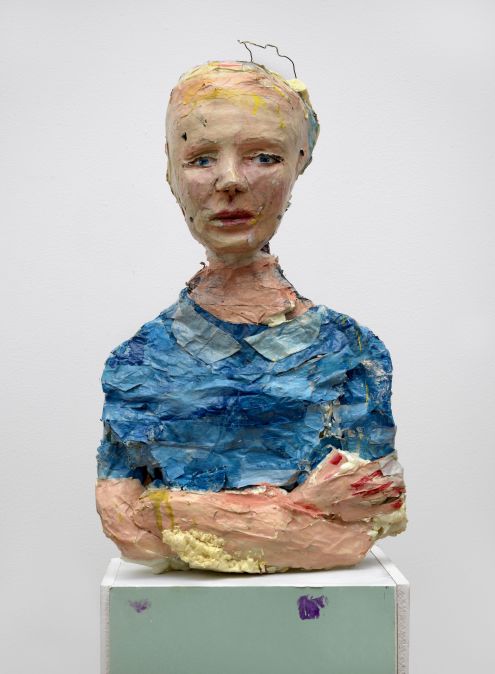