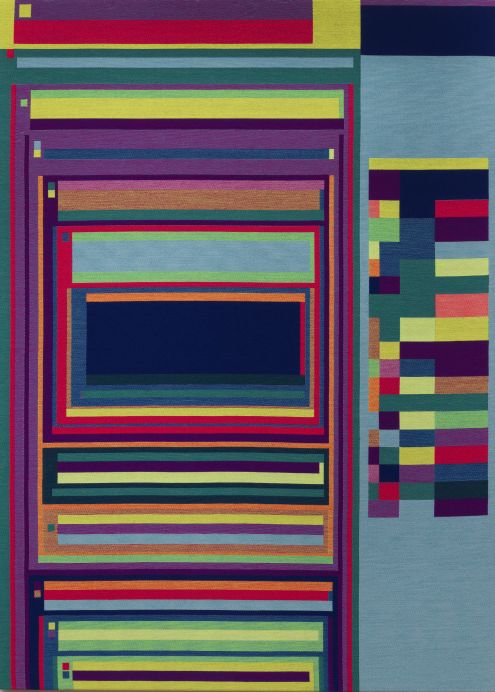 Complex Computational Compositions is the second solo exhibition by Rafaël Rozendaal (1980) at Upstream Gallery. In this last decade Rozendaal has made name with his artworks in the shape of websites through which he reaches an audience of over 60 million unique visitors a year. Since a couple of years he also produces physical works – in which the internet is however never far away. During Complex Computational Compositions, Rozendaal shows new works including tapestries and sculptures. A recurring theme within his body of work is to limit the influence he has as an artist on the final composition of his work.

Abstract Browsing tapestries
In 2014, Rozendaal developed the plug-in Abstract Browsing. Its code alters information from websites: images, advertisements and text fields are transformed into brightly colored geometric elements. This way, the narrative of the Internet makes room for an abstract composition that reveals the underlying structure of websites.

Rozendaal collects thousands of screenshots of Abstract Browsing generated compositions. A number of these are then selected by him to be produced as tapestry. Rozendaal: ‘I look for compositions that are the least picturesque. Painting is about a concentrated view, about beauty rather than utility. Websites are built exactly the opposite: developers are constantly looking for new structures that entice users to click somewhere, generating the highest advertisement revenue. Websites are created from necessity and efficiency, not beauty. I select compositions that are a bit awkward, unlike classic abstract painting that is about tranquility and contemplation.’

Internet art and the loom are less far apart than one might think. Rozendaal: ‘It feels natural to work with this technique. The loom stood at the beginning of the industrial revolution; the punch card for mechanical looms was the first form of digital image storage. Not all output of computer art finds its manifestation on screens.’

The websites that served as the basis for the tapestries are still recognizable. The Google homepage, the Twitter feed. The floor sculpture that is also on show is constructed in the same way: the composition consists of mirrors, based on the layout of Pinterest.

Haiku
Another ongoing project of Rozendaal is his series of Haiku, short poems inspired by the Japanese tradition. “In Japanese art, the idea applies that the physical entity of a work of art is not essential. I find it interesting to distribute my work in different ways. When you scroll past a Haiku on Instagram, your concentration is very different from when you read them bundled in a book, or view them in a gallery as an isolated wall painting.’

Shadow Objects
The Shadow Objects series consists of aluminum plates with laser cut geometric shapes. For this, an industrial algorithm is used to calculate the composition that delivers the most efficient use of materials. Just like Rozendaal’s earlier series of lenticular prints, the composition is further influenced by its illumination and the point of view. With an emphasis on the dynamic potential of shading the series can be seen in the tradition of artists like Lucio Fontana and Jan Schoonhoven, translated into the twenty-first century.

The Internet versus the gallery
‘When people asked what I did in the past ten years, I had a simple answer: I create art in the form of websites. ‘ Nowadays, Rozendaal does much more: his physical and digital works emerge simultaneously and influence each other. Within that fluid practice, exhibitions constitute important moments: ‘Because I do not have a studio, I almost never see my physical works; in that sense they are more virtual to me than the websites that I can watch at any time. I see gallery exhibitions as an opportunity to examine the materiality of my work and to experience it with a different concentration. Where the Internet is about distraction, art in a gallery is about introspection, calmness and tranquility.’ Moreover, Rozendaal sees no hierarchy between his websites and physical works. ‘The experience that you have when you are at home using Abstract Browsing on your computer is as authentic as viewing one of the tapestries in a gallery. From my point of view: the Internet is like a waterfall, an exhibition more like an aquarium’. 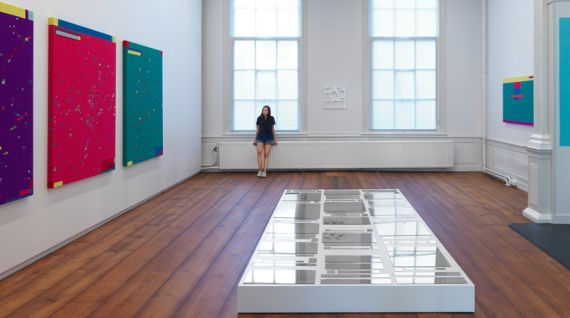 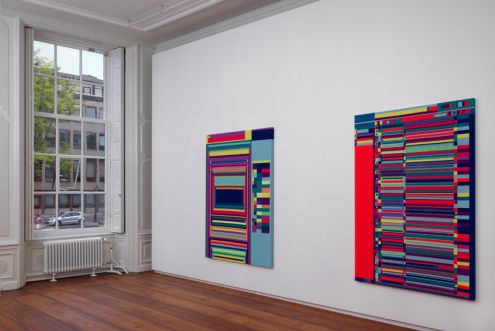