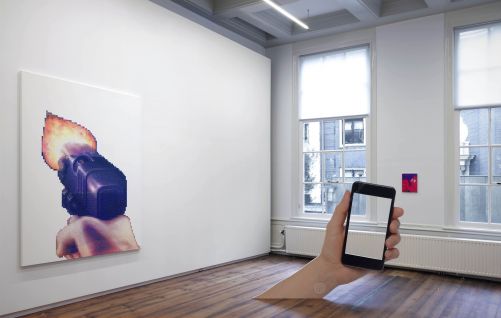 Upstream Gallery presents Shifting Optics III, a new edition in a series of signaling group exhibitions where the impact of digital culture on the visual arts is shown. In the first edition (2014), a new generation of artists was introduced. For this generation that grew up with computers, working in a hybrid method between analog and digital comes naturally. In the second edition (2015) recent developments were placed in dialogue with works by pioneers such as Peter Struycken and JODI, who were using computers and the Internet already in their art in the twentieth century. While the interface between art and computers is still relevant today, institutions and a wider audience now also recognize its urgency. With Shifting Optics III, Upstream Gallery continues its research within this rapidly transforming field by bringing together six artists who have embraced a digital working method. From different angles and in a variety of media, they reflect on the impact of computers on our collective consciousness.

Aram Bartholl (DE, 1972) researches the relation between the physical and digital world. A well-known example is his work Map, for which he made a large sculpture of Google’s location-icon on the exact locations that are indicated by Google Maps as city center. For the series Come get some, Bartholl uses a figurative element from early First Person Shooter computer games, in which the player has a personal point of view with at the bottom of the screen an image of a hand holding a gun. The coarse pixels remind us nostalgically of the visuals from nineties’ games. By using a manual silkscreen technique, unevenness arises, highlighting the difference between printed colors and the ones that appear on monitors. In the installation Point of View, Bartholl researches the role of the hand held screen as a view on the world. Thanks to developments such as Google Glass, the domination of these screens in our environment will decrease again in no time.

Max Dovey (UK, 1987) combines performance art and new media to research the impact of software and data on human beings. The work How To Be More Or Less Human is based on image recognition software. This software classifies photos by algorithms. When you enter a selfie via your webcam, the program analyses for example your gender, race and age based on similarities with images from online image databases. In a live performance, Dovey researches how photos of himself can be indexed by software as for example ‘sexy’, ‘pragmatic’ or ‘successful’. Clothing and posture play a major role in this. Because the software is based on commercial stock photography, it reacts on clichés and visual stereotypes. Dovey raises the issue of this disturbing development in a playful manner.

Constant Dullaart (NL, 1979) makes influential work that is deeply connected with the internet. Both online and offline, he reacts critically to the power structures of mega corporations that dramatically influence our worldview through the internet. He examines the boundaries of manipulating Google, Facebook and Instagram and recently started his own tech company Dulltech with Kickstarter. Like a digital archeologist, he also delves into the early days of the internet. The series Jennifer in paradise is based on the photo that was used as demonstration material in the first version of Photoshop. The founder of Photoshop made the picture of his girlfriend on a tropical beach. The intimate image would be adapted and manipulated by thousands of users of the program, before it would disappear in oblivion. Dullaart wants to give this photo, the very first to be manipulated with software that would change visual culture forever, back its iconic status in our collective memory.

Yu Honglei (CN, 1984) belongs to a generation of young Chinese artists who effortlessly combine digital and sculptural techniques. In China, his work is now widely picked up by critics and museums. Yu is fascinated by the way in which the daily life of artists is influencing their work. The digital animation video The farm is based on the eponymous painting by Joan Miró from 1922, on which his house in the Spanish countryside is depicted. In its digital version, Yu zooms in on various details, and so creates a narrative reconstruction of the daily life of the painter. Narrating is Miró's wife; her story includes anecdotal references to Miró's connection with avant-garde artists such as Man Ray, Max Ernst and Pablo Picasso. The space that Yu creates, asks for reflection on how Western art history is spreading globally through the internet.

The working method of Austin Lee (US, 1983) is exemplary for the generation of digital natives to which he belongs. The digital reality is completely natural to him, which is reflected in his use of 3D printing techniques, GIFs and his recently published SPHERES publication that merges print with augmented reality in a spectacular way. In his paintings, Lee ingeniously translates pixels to paint. The works start as a sketch on an iPad. Many artists see especially the limitations of drawing software versus a sketchpad, but Lee embraces the typical aesthetic that arises from it. The translation from the screen to the canvas gives the work a less volatile character, but the use of aerosols and fluorescent paint recalls the digital origin. Lee's distinctive painting style is spontaneous and accurate, with a playful frankness that reminds of the Cobra movement. The boundless energy evokes the best of the New York graffiti culture from the 80s on. But most of all the work is unmistakably contemporary.

Jan Robert Leegte (NL, 1973) is among the first Dutch artists who were involved in the 90s NetArt movement. Since 1997 he creates art in the form of websites, which he connects to art historical movements such as minimalism, land art and conceptualism. Leegte also translates the themes of his work to offline media such as print, sculpture and projections. A recurring theme in his work is the sculptural materiality of interfaces of computer programs. Remember the early graphic design of cursors, selection boxes and menu bars that were to give the user the impression of actually physicaly pressing the buttons with graphic shadows. In 2000, Leegte made the website Scrollbar composition, entirely composed of scroll bars. The appearance of the artwork is dependent on the software that one uses to visit the site. The work In memory of new materials gone originates from this: the scroll bar captured as a physical sculpture that is preserved before software updates definitively put an end to it. With Ornaments Leegte creates a link between computer interfaces and architectural ornament (such as the classical façade of Upstream's seventeenth-century canal house) as a largely forgotten frivolity. 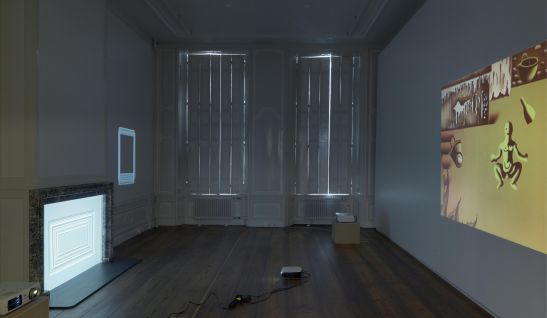 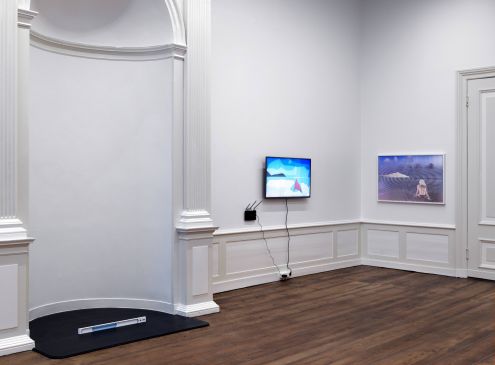