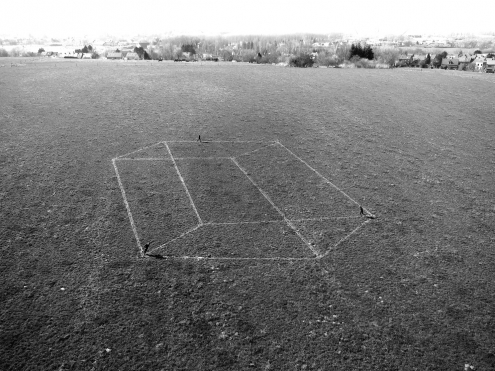 The exhibition focuses on the concept of traces in the works of these artists. A trace is a leftover, an impression that can refer to someone who is no longer present or an event that occurred in the past. Traces can be used as evidence, evoke memories, or suggest something about the history of an object.
A mix of young talents and established names is selected for the exhibition. This will make visible interesting links and shared areas of interest in the works of artists from different generations.

In the selected works, the artists treat different aspects of traces in various ways. For instance Marc Bijl (1970) who scoured a painted canvas with an electrical sander, thus laying bare the underlying structure of the wooden stretcher underneath the canvas. The resulting scuffmarks are a direct reminder of the artistic action. Bijl also shows a video documenting one of his interventions in public space. On an intersection somewhere in Berlin, he placed sculptures disguised as construction materials and left these to urban erosion.
Marinus Boezem (1934) uses one of the most iconic symbols for traces, the fingerprint, to investigate the meaning of the artist signature. How can an artist transfer his aura onto his work? It is a recurring question in Boezem’s impressive oeuvre. For example, the sculpture The Absence of the Artist (1970-’95) is about the memory of the artist’s presence, symbolized by his empty pair of shoes and a half-finished signature.
Stanley Brouwn (1935) did extensive research on the concept of covering distances. Footprints play an important role in his work. He also created a system of measurement that is based on dimensions of his own body, which can be seen as an almost mythical trace of the artist, who is always explicitly absent.
Ryan Foerster (1983) shows photographs that are affected by the elements. After a flooding left a trail of destruction in his home and in his collection of analog photographs, this provided material for new works. Foerster often lets his works be eroded by the weather or by chemical solutions, before he considers them finished.
Jeroen Jongeleen (1967) shows a photograph of a field on which a pattern has been created after he ran on it in a certain shape. After running the same path over and over again, a trail eroded. Jongeleen regularly leaves his mark in public space as a way to appropriate this space but also as a comment on the way many (commercial) parties put their claim on it.
Michael Part (1979) has always been interested in the physical traces that are the result of chemical processes, particularly in analogue photography. After many hours of experimenting in the darkroom with developing liquid and photosensitive materials, he now works with silver and bronze plates on which he starts chemical processes such as oxidation. He can only partly influence the outcome.

More photo's of the exhibition can be found here. 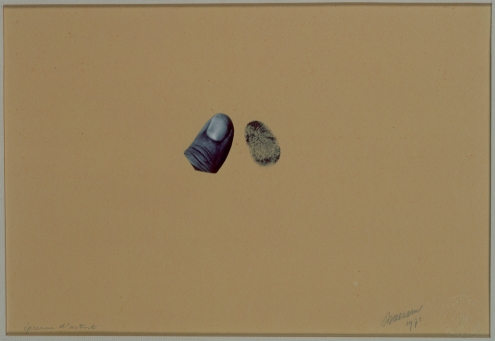