The Armory Show is New York’s premier international art fair, showcasing over 200 galleries from around the world. Offering ambitious programming, curatorial initiatives and specially commissioned projects, The Armory Show combines access to high quality modern and contemporary art with a commitment to spotlighting new and emerging voices in the visual arts.

Upstream Gallery is pleased to present the work of artist David Haines at The Armory Show NY 2016.

A particular technology related anxiety underpins the new work of British/Dutch artist David Haines. In a two channel video work and series of drawings, he weaves dialectic structures to shore up the symbolic existence of on line identities - the flesh and the code, the physical and the spiritual, the hyper-real and the abstract.

In his new two channel video work ‘A Composition with Words, Images and Reflections’, Haines takes his viewer on a cyber journey through the bedrooms of online ‘chat boys’ in search of materiality. A synthesized voice advances through the work, narrating parts of lectures given by the philosopher and theologist Alan Watts in the 1960’s on the desire and yet impossibility of treating the ego as a physicality. Haines’ search for materiality is delineated further when the footage ruptures through optically dazzling abstract animations and hypnotic dance beats. This inescapable physical interface is weighted against the otherwise cold landscape of digital code, laying bare the ‘otherness’ of these appropriated dematerialized bodies.

Represented identity is exposed further in a new series of graphite ‘portraits’ and still lifes. Through the reconstruction of images found online, the bodies Haines exposes in these works are no longer abstract code but hyper real graphite - material substance smeared, smudged, erased and redrawn. A hyper awareness of surface pervades the works. Screens reflect, synthetic materials crease and shine, flesh glows. A pulsating reference to technology permeates throughout the drawings. A boy poses in front of lifeless screens, their cables hanging like extorted entrails paralleling the two slimy hearts he holds in his hands, an offering to the viewer that is no longer symbolic code but meat, no longer virtual code but a real physical mark. A bed scene depicts two boys engaging narcissistically with a scanner, futilely printing out specular images of their body parts for each other, desiring release from a virtual world that does not exist. A new series of still lifes also seek to reconcile the flesh and the code, an iPad appears differed against a blood soaked heart that appears to vibrate, the image paused, it has the potential for movement but for now it is just a screen, simply pixels. These works show the uneasy relation of symbolic existence and propose that the indexical experience of looking at drawing is even more vital in the post digital world.

Image: courtesy of Roberto Chamorro for The Armory Show

This participation in The Armory Show is supported by the Mondriaan Fonds. 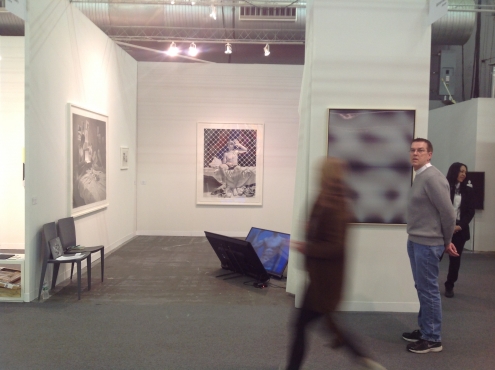