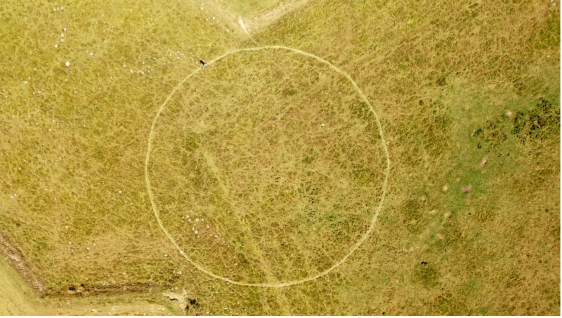 Upstream Gallery is proud to present Jeroen Jongeleen’s Running in Disputed Territories - No Man’s Land at Artissima 2022. Jongeleen’s (NL, 1967) work generally evolves in public spaces. He leaves traces in the (urban) landscape which he subsequently documents with photographs and films. With his interventions he promotes the free use of the public space and questions the way corporate influence, media and advertising, architecture and regulations limit and direct a citizens’ behavior. Jongeleen describes that his motivation to create art is not about 'decoration or making people happy’ but about ‘free speech and movement, about opposition as the essence of a truly vibrant democratic society.’ As such, his politically motivated work sets out to illustrate the power and the dynamics of the street, while offering a utopian vision for the raw future.

Jongeleen’s Running in Circles series originated in the pandemic, but has since evolved into a long-term study of the power dynamics of public space, the powerlessness of the individual and, in his most recent No Man’s Land series, of significant historical battle grounds. No Man’s Land captures Jongeleen running in endless circles through the landscapes of Northern Europe. Elevating and descending with the landscape’s engraved craters left behind by shells, dodging remnants of explosives, running above old fortifications and alongside WWI memorials - Jongeleen’s performance is engulfed by the history of the land, the same land that was host to events like the Battle of the Somme, one of the deadliest battles recorded in human history.

Jongeleen’s hours and hours of running in circles are documented by a drone. This results in silent recordings of the solitary, intimate action. A performance by the artist who is trapped, stuck in a hamster-wheel of his own making - thereby posing the question: are wars of attrition also hamster-wheels of our own making? We are fighting for our utopian ideals, yet seemingly stuck in the dystopian consequences of our own actions.

Jongeleen’s act is a performance of anarchy in a place marked by power, but what does the uprising of an individual weigh within the wider context of history? Just like the muddy or dusty paths that Jongeleen etches into the landscape, his presence goes almost unnoticed as mother nature continues to exercise her dominance.

Another way of leaving traces are the statements Jongeleen spray paints on fences, banners, walls and other public surfaces which he documents through photography. The, often apocalyptic, quotes that are used are taken from news sites and papers, reflecting on the insanity of global contemporary life and politics. Like the running traces, these statements - “what I think about when I’m (thinking about) running” are also quite temporary. They are usually removed in a few days by the municipality, confirming Jongeleen’s ideas about the power dynamics of the street just as it fits his methods as interventionist artist.

The influence of art history is evident in the work, from the anti-authoritarian Situationist International movement, Fluxus and Dada, to Land Art and Conceptual art interventions by Richard Long, Alberto Burri, Gordon Matta-Clark, Guiseppe Penone and Robert Smithson. As well as the mundane repetitive early works of Bruce Nauman or the endurance performances of Marina Abramovic & Ulay. Jongeleen’s work from his Running in Circles series is in collections including Kröller-Müller Museum, Museum Voorlinden, SMAK, Museum Boijmans van Beuningen, and Stedelijk Museum Schiedam.