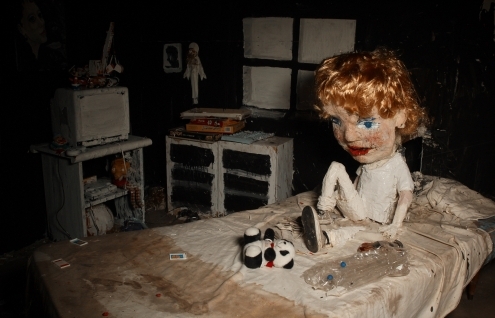 La Casa Lobo celebrated its world premiere in the 68th Berlinale 2018 where it received the Caligari Award. La Casa Lobo tells the story of Maria, a young refugee stationed in southern Chile after escaping from a sect of German settlers. She is welcomed into the home by two pigs, the only inhabitants of the place. Like in a dream, the universe of the house reacts to Maria’s feelings. The animals slowly transform into humans and the house becomes a nightmarish world. The film is inspired by Colonia Dignidad, a secretive and controversial sect in southern Chile established in the sixties by German immigrants. León & Cociña tell the story as if they were part of the sect. They pretend to be Colonia Dignidad’s animation film company and make the film as an indoctrinating fairy tale.

León & Cociña, whose work was also on show at the Latin American pavilion of the Venice Biennal 2013, the Whitechapel Gallery, the Guggenheim and KW Berlin, have been working on the creation of La Casa Lobo since 2013. The artist duo has since created a monumental feature film with an impressive duration of over 60 minutes. The film was shot frame by frame using digital photography, resulting in a single sequence shot. All of the aesthetic elements in La Casa Lobo are in a permanent state of change. Like in dreams, where one person can assimilate the attributes of another, the story and characters of the film take on different materialities. All of the changes in the house, characters and objects emphasize the permanent under-construction reality of the film. For the incredibly time-consuming production process, they initiated a nomadic studio project setting up temporary workshops in museums and other art institutions. Starting at Upstream Gallery in 2013 during their exhibition Flowers, the studio has traveled to Casa Maauad in Mexico City, Modern Art Museum Buenos Aires, Contemporary Art Museum of Chile and the Media Arts Biennale in Santiago de Chile among other locations. Each time, La Casa Lobo was presented as a work in progress. And by making the set part of the exhibition, the working process itself is turned into an artwork.

With their experimental films, León & Cociña create a new interpretation of the religious symbolism and magical rituals that are deeply rooted in the traditional culture of Latin America. The surrealistic, esoteric films of Chilean underground filmmaker Alejandro Jodorowsky but also the aesthetics of children’s fairy tales are sources of inspiration for the duo. A distinctive, unpolished cinematographic language furthermore characterizes the stop-motion films by León & Cociña. The paper mache figures and innocent-looking drawings strongly contrast with the heavy topics such as religion, sex and death that the films deal with. Influenced by psychoanalytic theory, the artists seem to tap from a nightmarish collective subconscious. Their world is populated by sinister shadows and creatures that are constantly subject to metamorphosis, and seem to come straight from a hallucination or a fever dream. Yet the atmosphere can shift quickly and the ominous creatures dissolve as quickly as they appeared.

La Casa Lobo premiered at the 68th Berlinale in 2018, where it was awarded the Caligari Film Prize. Since then it was selected for several lm festivals around the world where LeoÌn & CocinÌƒa won many awards and prizes, among which the Public Prize and Best Cinematography Prize at FicValdivia (Chili), Best Animated Feature Film at FicMonterry (Mexico), Best Latin American Film at Quito Latin American Film Festival (Ecuador), Jury Distinction at Annecy Film Festival (France), GNCR Prize Special Mention at FidMarseille (France) and the Special Mention of the Jury at Future Film Festival Bologna (Italy). 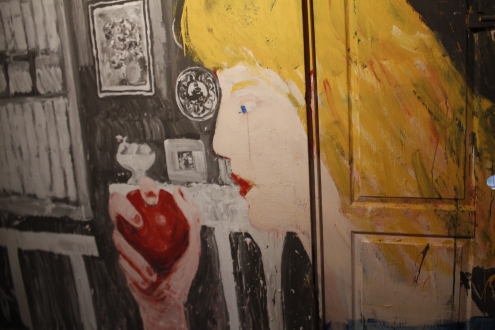 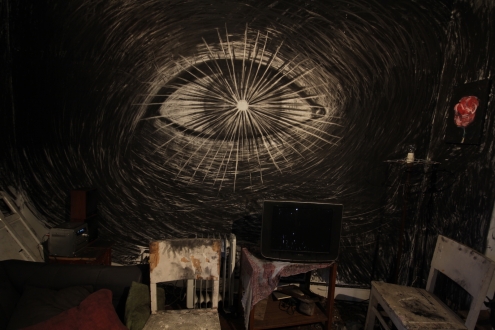