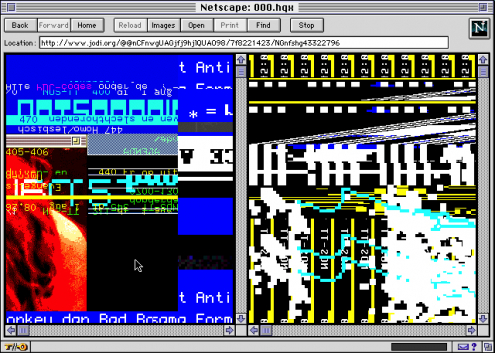 2020 marks 25 years of Net Art, the most radical art movement in decades. Upstream Gallery presents the work of artist duo JODI, dedicated to signal their position as pioneers in the international development of internet art in the mid 90s. Brought together for an international public for the first time, the presentation includes 13 iconic works, including websites, a.o. their first website which was shown in the internet art section at Documenta X in 1997, interactive game art, earlier shown at the Guggenheim Museum, screen grabs of internet interventions, including Geo Goo, that was in the ground-breaking exhibition Electronic Superhighway at Whitechapel Gallery in 2016 and a live browsing performance, performed daily by the artists.

Collaborating as JODI since the early 1990s, Joan Heemskerk and Dirk Paesmans were among the first artists to respond to the introduction of the internet. Since 1995, JODI have pursued a programmatic, artistic exploration of the computer and the internet. Their practice is characterized by chaos and non-functional designs that reveal the fundamental characteristics of the net. In a medium-specific way, they (de)construct and analyze the languages of new media: from visual aesthetics to interface elements, from codes and features to errors and viruses. They challenge the relationship between technology and users by subverting our expectations about the functionalities and conventions of the systems that we depend upon every day.

Internet art, while often been under-recognized in art history, is the most radical art development in decades, it is the art of our digitalized time. JODI has played a central role in it since the rise of net art in 1995. Their work has been featured extensively in writing about electronic and media art, they exhibited at Documenta X in Kassel (1997), received the first Webby Award in the net art category (1999) and in 2014, they received Rhizome’s inaugural Prix Net Art. Their work was acquired by a.o. the MOMA, New York, SFMOMA, San Francisco and Stedelijk Museum, Amsterdam.